2010 is coming to a close. It has been a long year, full of chess training, chess competitions, chess promotion. As women’s world chess champion, I’ve tried to do my best to show the world how cool the game of chess is, and in that role I played countless chess simuls, gave talks, made goodwill chess events in Colombia, promoted chess in Peru at the Machu Picchu, in the USA and in Russia.

I saw my book “Diary of a Chess Queen” be very successful (see reviews), as well my DVD “Chess Blitz Fever” (see parts of it on my YouTube channel, the video of my game against Magnus Carlsen has 85,000 views now, and on YouTube it’s only part of the game). I passed 100,000 followers on Twitter, and 100,000 channel views on YouTube, more than 15,000 fans/friends on Facebook, and I also played in a lot of tournaments, and was successful to get Gold medals with my team at the Olympiads, we won all 11 matches we played, a record!

I was not successful recently in defending my title of Women’s World Chess Champion in the Turkish knock-out event, but I still stay attached to chess competition (you will see me playing in a lot of chess tournaments next year and I plan to fight to get my title back), and to chess promotion since it’s my duty as world champion.

But one thing is sure, I will stay your Chess Queen™, next year and the years after that, spreading the love of chess, with as much kindness and devotion as ever.

To celebrate that, I will start by repeating what I did last year and which seems to be a nice tradition, to conduct a GOODWILL CHESS SIMUL anywhere in the USA, for free!!! That means that if any chess club or school or organization would like to have me play chess or give a talk to their kids/students/members, I will do it gladly, and will not charge a penny for the event. I will even bring Christmas presents for the simul players.

This offer is valid up to December 31, 2010. The only requirement is to get reimbursement for factual airfare and hotel if used. If the event is in Miami, no costs at all since I will be in Florida at that time. Preferably the winning entry should be 1 flight away with no connections from Miami, although I will consider all options (last year I flew to Tucson, AZ). Please submit requests to host the “Alexandra Kosteniuk Goodwill Chess Simul” event to chessqueen@me.com .

Read about last year’s Goodwill event in Tucson, hosted by the wonderful organization 9Queens, which I support. 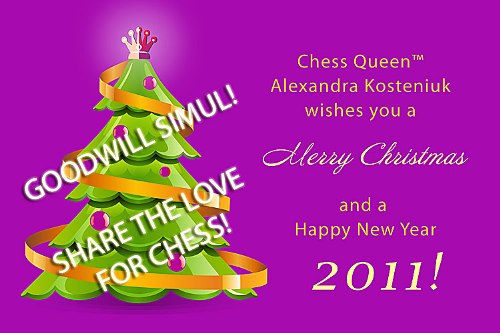