The 2010 Poland Chess Championship was held on 9-17 January, 2010 in Warsaw, Hotel Novotel Centrum. The tournament was played over nine rounds of Swiss system, with 28 players and 17 Grandmasters among them. GM Radosław Wojtaszek (2639) emerged as the leader with perfect score after four rounds, but then he slowed down, and Chessdom correspondent GM Mateusz Bartel (2614) switched gear for a fantastic finish to claim his second title of the Polish Champion. 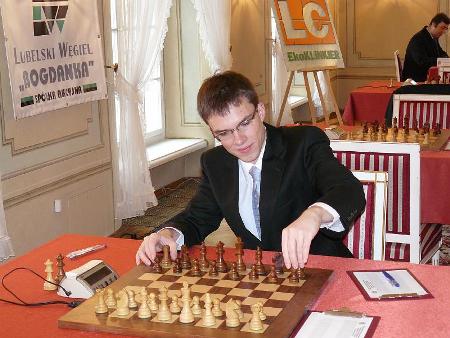 We first met him during the ETCC on Crete, where his team Poland finished excellent 4th, and ever since he had been contributing valuable news and articles for Chessdom.

Blitz interview with the Champion

Chessdom: Hello Mateusz, congratulations on winning the Poland Chess Championship! What were your expectations prior to the tournament and how did you prepare?

Mateusz Bartel: My preparation was far from usual – I am chief editor of chess magazine “Mat” and I was completing articles for the next issue. Of course, I also tried to prepare for the championship in a more convenient way, but I didn’t succeed to complete all the work as I wanted… My aim was to be in top 2 – to qualify to the national team for the next Olympiad. But before the event I wasn’t sure if I can achieve it, the competition was really strong.

Chessdom: Did you still believe that it was possible to win the Championship after the loss in the third round? Which moment was critical for your success?

Mateusz Bartel: Before the event I thought that Radoslaw Wojtaszek is probably the biggest favorite. I lost to him in round three, then Radek won with black versus Macieja and I thought it’s almost over. But suddenly Radek somehow lost his power and I used my chances. Of course, critical was round 8, when I won vs. Marcin Dziuba. He was clearly winning for a long time and I won in a very lucky fashion.
I should also mention big support of my girlfriend, WGM Marta Przezdziecka. In all critical moments she helped me with a good word.

Chessdom: Which was your best game in the Championship?

Mateusz Bartel: Probably it was a game versus Michal Krasenkow. I played also very good game with Bartek Macieja but I spoiled completely winning position with one stupid move…

Chessdom: What is coming next? What are your plan for the future?

Mateusz Bartel: European Championship in Rijeka. I planned to play one of the Moscow events, but finally decided that it’s better to spend some time on training…

An earlier interview with Mateusz Bartel