The battle for Peru with outcome

Cambodia, Chinese Taipei, South Korea, Peru and Philippines join the supporting nations for President Kirsan Ilyumzhinov, making the total number 55. Previously two more major waves were announced (to 35 countries and to 50 nations), while the Continental President Jorge Vega announced in an interview that support for Ilyumzhinov will soon reach 100 countries from the 174 national federations members of FIDE.

The Philippines and region support comes as a logical response to the new tournament sponsorship programs arranged by FIDE. The support of Peru comes after a similar move, where OneFIDE team announced that “The first Latin American Cup will be organized in Peru in August. This new FIDE event will have a prize fund of a US $100,000!”

The announcement from Peru came from the President of the Federation Dr. Milton Iturry the sameday Kasparov and Karpov arrived in Peru for a series of promotional events. Kasparov confirmed for the local newspapers, “We are in Peru because of our campaign for FIDE. We want to change it, renew it, and make chess a massive sport loved by everyone.” The press announcements were followed by a simul by the two Ks with 24 kids (video by EFE here). Despite the press conferences the final vote of Peru will go to Kirsan Ilyumzhinov, as per the document by Dr. Milton Iturry. 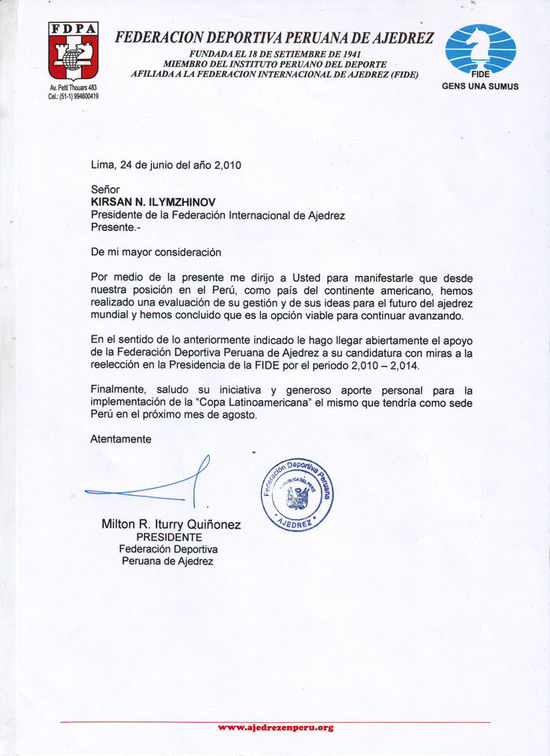