Documents handed in at the FIDE Office in Athens

The city of Tromsø and the Norwegian Chess Federation (NSF) are strongly
committed to hosting the 41st Chess Olympiad in 2014. The application is backed by
the Norwegian Government through an allocation of NOK 70 million, approximately
€ 8.8 million based on today’s exchange rate.

With its 75,000 inhabitants, including 10,000 university students, Tromsø has all
the amenities of “a small large city”. Chess players around the world will discover
a friendly and open-minded population with hotels of excellent international
standard, an attractive restaurant scene and diverse cultural activities.

Tromsø has a very active chess community and hosts an international festival, the
Arctic Chess Challenge, every August. The tournament will be further upgraded in
coming years to prepare for the potential Olympiad in 2014. As an important element
of this preparation Sjakk Tromsø also offers to host the World Cup in 2013 as part of
the application for the 41st Chess Olympiad. 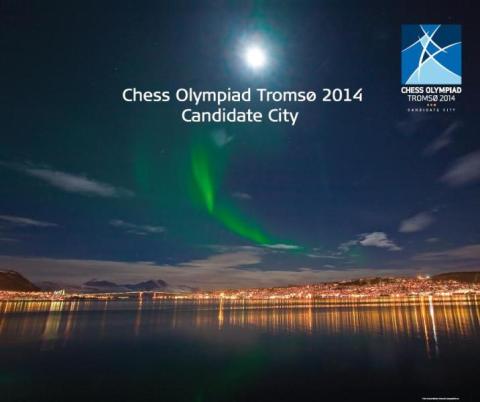 A national project group to prepare the Olympiad application was established in
2007 and in May 2008 the bidding company, Sjakk Tromsø 2014 AS, was established
with The City of Tromsø (90%) and the NSF (10%) as shareholders. Thus, this
application is the result of a long and thorough process, and Sjakk Tromsø will be
well prepared to take on the responsibility of the Olympiad in 2014.

Key factors in our application are briefly presented below and further outlined in
the application document.

• Sjakk Tromsø will apply to host the Chess Olympiad during 1-14 August 2014, a
period of pleasant and comfortable weather, offering the Olympic chess
community a range of attractive experiences beyond the chess itself.

• The main objectives are:
Organize an Olympiad that is perceived as highly successful by all involved
parties
Recruit more players via increased Internet presence and access
Spotlight the significance of chess in education and intellectual development
Provide an unforgettable and positive experience of Tromsø, northern Norway,
and Norway

• The Olympiad itself will begin on 2 August and end 14 August 2014. The tournament
will consist of 11 rounds, one round per day and two rest days. All matches will be
transmitted via the Olympiad’s Internet portal and selected matches will be shown
on large screens with commentary in the hall.

• The playing venue will be the new cruise ship Port Terminal located by the
harbor, 300 meters from the main Tromsø hotels. The complex will consist of three
adjacent buildings of which 8,000 square meters are available for the Chess
Olympiad.

• The biennial FIDE Congress takes place over nine days in parallel with the Chess
Olympiad, and concludes at the same time. The FIDE Congress is held in an
appropriate facility, in one of the city’s main conference hotels, next to the
playing hall.

• Sjakk Tromsø is committed to staging an attractive opening ceremony that
contains both procedural and cultural elements and a slightly less elaborate
closing ceremony. In addition the Olympiad will be center stage for the host city
and its residents, and a comprehensive cultural calendar will be an integral part
of the Tromsø 2014 Chess Olympiad.

• During the Chess Olympiad, a range of side events will be held. These will include
various tournaments, seminars and the NSF board meeting.

• The web site/portal will be the event’s most important communication channel to
the public and major resources will be allocated for this purpose.

Presentation during the 2008 Dresden Chess Olympiad

There will be a need for about 35,000 overnight stays spread over 20 days. The
peak need will be 2600 beds during the FIDE Congress, which is the nine last days
of the event.

Sjakk Tromsø has received positive response from the hotel industry with about 80%
of capacity free for the Chess Olympiad in the period 1-14 August.

Transport to and from Tromsø

Most of the transport needs are linked to the 2600 accredited attending. Most of
these are coming from abroad and will arrive by air.

The Chess Olympiad will involve concentrated traffic, which makes it possible for
airlines to increase capacity in advance and to fill planes more than during ordinary
traffic. The conclusion is that the Olympiad represents a manageable traffic
increase for the airlines. August is a month with good weather conditions and high
regularity. International air traffic will come over Oslo Gardermoen Airport (OSL), the
main airport in Norway, which has more than sufficient capacity to handle the traffic.

In its preparation Sjakk Tromsø will, in cooperation with the authorities, focus particularly
on the visa issue, securing a smooth and effective entry to Norway for accredited
personnel.

The Olympiad will be financed through a combination of governmental support,
regional funds and marketing income from sponsors, partnerships and other sales
income. The grant from the Norwegian Government of NOK 70 million/ € 8.8 million
covering 73% of the budget is a cornerstone of the financing and gives us great
confidence in our ability to organize a highly successful Chess Olympiad in 2014.

The city of Tromsø, The Norwegian Chess Federation and Sjakk Tromsø 2014 AS look
forward to presenting our application to FIDE, its representatives and certainly to
the FIDE Congress in Khanty-Mansiysk during the 39th Chess Olympiad later this
year.

The World Cup 2013 will also take place in Tromsø, in one of the major hotels in the
city center. It will preferably take place in the second half of the year, at a time to
be designated by FIDE. With Tromsø already identified with the Olympiad by then,
there will be a strong focus from the chess world and Norway.

The World Cup will give Tromsø a chance to test various technical solutions and
gain valuable input prior to the Olympiad. We plan to use this occasion to show
sponsors, government, media, and the public how to use the attention such an
event will create in Norway. Although there will only be 128 players, the World Cup
provides a chance to show the chess world that Tromsø is ready for the Olympiad.