Press Release: Chess in Delhi is on a roll if the results of the host-city players’ in the just concluded Commonwealth Chess Championship are any indication.

Three Gold medals, three silvers and two bronze medals was indeed a very rich haul taken by the local players and leading the list was latest edition to Delhi – former world junior champion and Grandmaster Abhijeet Gupta who obtained the Silver medal in the open section. Abhijeet, who is working for BPCL, has shifted his base to Delhi recently.

Besides Gupta’s silver, India’s youngest International Master Sahaj Grover, 14, brought laurels to the home association and the country by bagging the gold medal in the under-16 section. Sahaj, a student of Kulachi Hansraj model School, finished with an impressive tally of 8 points out of a possible 11 and will also gain some ELO points from his outing here.

Arjuna awardee Tania Sachdev tied for the first place but her tiebreak was only good enough to get her the Silver medal in the women’s section. This was incidentally, Tania’s second successive Silver in the Commonwealth Championship and the queen of Delhi chess will look forward to an improved performance in the next edition. 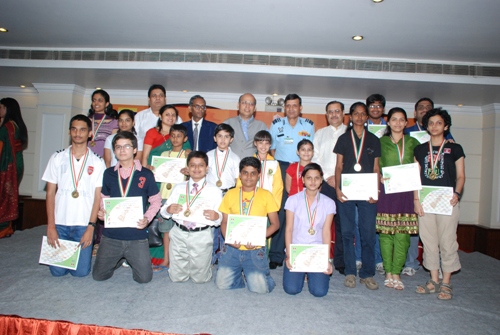 The other two Gold medalists were Aryan Chopra who excelled in the under-10 section and Palkin Kaur who won the under-8 girls’ section. Aryan got the gold despite scoring 5.5 points and even a last round loss kept his opponent a half point behind. Interestingly, Aryan, a student of DPS R K Puram, was also the youngest amongst under-10 players this year. Palkin, an upcoming talent, hails from the St. Thomas School.

A small disappointment for the chess fans was missing out on the gold in the open section wherein Parimarjan Negi missed his chances after a rocking 7.5/8 start. Parimarjan could only make a half point in last three rounds and had to be satisfied with the Silver medal in the under-20 junior section.

The two Bronze medals were ensured by the students of Modern School Barakhamba Road – Vaibhav Suri and Arunima Kalra. While Vaibhav was a bit unlucky to miss out on his final International Master norm, his performance was good enough to place him third in the under-14 section while Arunima won the Bronze in the under-16 girls.

Apart from the above haul of medals, the championship was also fruitful to Gurpreet Pal Singh who made his maiden International Master norm. Gurpreet, who is working with the Northern Railways, was in top form through out the event and his achievement was a class act too.

“This by far is the best that I had imagined. The impression that the players from Northern part of the country lag behind in chess has long gone with the advent of players like Parimarjan and Abhijeet and with this new crop of players, we are sure there will be many more Grandmasters from the National Capital in the coming years”, observed Bharat Singh Chauhan, Organising secretary, and Hony. Treasurer All India Chess Federation.

Logic-defying regulations have often taken the sheen away from the Commonwealth chess medals, particularly those in the age-group section. The absurdity is now absolute with the return of players from the non-Commonwealth nations to the latest edition of the Parsvnath Commonwealth chess championship.

The home page of the organisers, Delhi Chess Association, declares, “Commonwealth chess has been incorporated with international tournament. Players from all countries are welcome.” The anomaly, that was wisely removed a few years ago, is back.

As a result of this ridiculous change, Russia’s Alexey Dreev heads the list of 20 Grandmasters that includes a mix from Argentina, Azerbaijan, Venezuela, Ukraine, Kazakhstan and Uzbekistan, among others.

Many within the All India Chess Federation privately agree that the character of the Commonwealth championship is clearly lost. On his part, the AICF treasurer and chief organizer Bharat Singh Chauhan, says “By making it into an ‘Open’ event, the presence of stronger players enhances the prospects of norm seekers.” But can it any longer be called the Commonwealth championship?

This is the third format for the championship in as many years. In 2008, it was open only for those from the Commonwealth nations playing in one consolidated field. In 2009, host Singapore wisely separated the Open event from the age-groups. Competition for under-20 and under-16 were held together, while under-12 section was separate.

This year, it will be back to the old format were age-group medalists are picked at the end of the competition after they indicate their preference of age-group. Quite simply, it is easier to win a Commonwealth age group medal than making the medal-bracket of the National championship.

Read the full article by Rakesh Rao in The Hindu newspaper