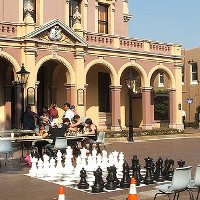 The tournament runs on 6-11 April 2010 at the Parramatta Town Hall and the prize fund is totalling A$14,000. Principal sponsor is GM Murray Chandler. There are 78 players in the Open group.

There were no surprises in the first two rounds and titled players won the games against lower rated opposition.