I want to tell you about what is in my experience the BEST consumer product chess promotion done thanks to chess.

The goal was to create an association between the game of chess and the vitamin supplement for kids “Tarrito Rojo” of JGB. Tarrito Rojo help kids, especially those who can’t have a balanced diet due to limited means, to have all the vitamins they need to grow well (A, B’s, C, D, E, Calcium).

The key message is that chess helps to develop mental health, together with physical sports which help have a strong body. In addition, good nutrition with the minimum amount of vitamins is also key to both mental and physical health. The latin saying “Mens sana in corpore sano” tells us that a healthy body should be accompanied with a healthy mind. 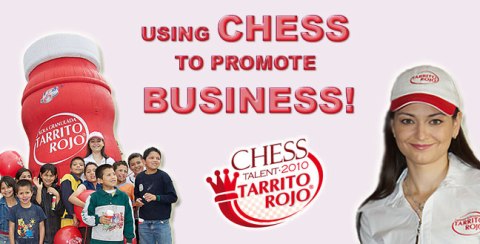 For the second time (I already participated in this program in 2005, see lots of movies about it on ChessMovies.com) JGB invited me, this time as the Queen of Chess (and reigning women’s world chess champion), to lead this promotion campaign. The budget for this promotion was huge, I estimate it to be more than $200,000, and was directed by top managers of the Public Relations company “Loyalty” and by brand managers of JGB extremely professionally.

The events in which I participated took place from April 17 to 22, in the Colombian cities of Bogotá and Medellin, but in fact the “Tarrito Rojo Chess Talent” started much before, with preliminary competitions to determine the best 25 youths from those 2 cities who could play me in the main events, which were to be 2 big simuls. Read the original Press Release. The Preliminary tournament in Bogotá had 465 kids participating and many more in Medellin.

There were many events all 4 days, 2 press conferences, dozens of TV interviews (besides I participated in one of the most popular TV shows for kids, video soon to come), many magazine and newspaper interviews, exhibition blitz and even blindfolded games, two large simuls, several photo shoots, and even some time for tourism. See the full official photo album of the event.

The Bogotá simul at the Gran Estación Mall

The simuls were gigantic, with thousands of visitors all the time of the simul (chess simuls last for hours, which is great to have lots of spectators). There were “Tarrito Rojo” posters and promotional materials all over, young ladies were offering free degustations of Tarrito Rojo to spectators (I heard 8,000 degustations were distributed only during the Bogotá simul).

All players were given T-shirts and logo caps, and best of all, the prizes were incredible – 6 players received a coupon for free vacation for 2 people to a beach resort including airfare and 7 nights hotel, I have never heard of such huge prizes before for chess simuls. While I won all my games except 4 draws, I still selected 6 prizes for the best players of the event (I believe that’s over $10,000 in prizes we gave out). 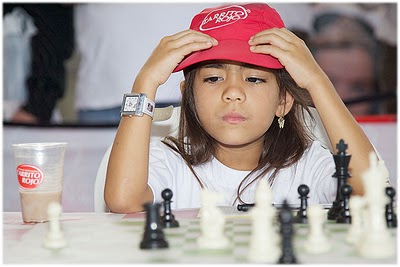 This little girl won one of the top prizes, 7-day vacation for 2!

Sharing chess and love with kids

The key point of my visit was the good-will trip we made to the Foundation for underprivileged kids, “Pies Descalsos” (that means “barefoot”) which is a Foundation created by the famous Colombian singer “Shakira” (watch her music video “Pies Descalsos”), and helps close to 1,000 kids in a very poor area about 1 hour away from Bogotá. We went there and donated a jar of Tarrito Rojo to every single kid in the foundation as well as lots of chess sets so they could play chess. You can see from the photos that it was a very special moment for me, I will soon post one or more videos about that visit.

Right upon arrival to Medellin, I was invited to the wonderful home in what is considered the “Suiza colombiana” (Colombian Switzerland) of the biggest chess collector of all of South America, Don Camilo Restrepo. I was amazed by his collection of original chess books of the 16th century, such as the Ruy Lopez of 1584, Greco of 1656, Philidor, Lolli, Ponziani, Stamma and many more. He has original score sheets and letters of Alekhine, Bogoliubov, Marshall, Retu, Janowski, as well as original antique chess sets which allow him to play those games on a chess set of the times, incredible, it was like a trip in chess history! He treated me well also with delicious arepas, quesito, empanadas and chorizos. I won’t forget that side-trip, for sure!

The simul in Medellin was in the “Parque del Ajedrez” with lots of people watching and a perfect organization. I drew 3 games and won the rest in what was quite a strong field of young Colombian hopefuls (including the U-14 Colombian champion). 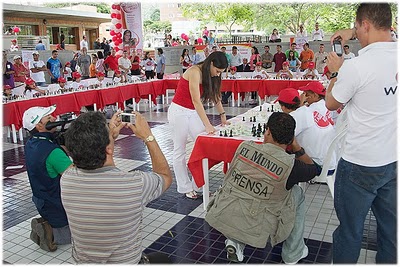 The Medellin press was very active at the simul 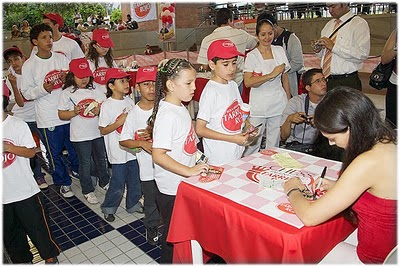 In Medellin, JGB decided also to make a donation of chess sets and hundreds of jars of Tarrito Rojo to the military veteran organization “Héroe Camina”, which are the military forces who have lost legs from mines that are put in the jungle by narco traffickers so that the police and military cannot get close to them. Those people have incredible courage to do that work, they are all heroes, and it was great to be among them.

I am so glad to have been part of this “Tarrito Rojo Chess Talent 2010”, and pleased most of all to see the good the company JGB is doing, first for their country, supporting good nutrition and donating to good causes, but also using chess in their marketing program. I have bee assured by the General Manager of JGB that they will continue to push to advance chess in Colombia, and are working to get chess as an obligatory school subject in school. Having kids playing chess in Colombia instead of doing nothing outside is wonderful for the intellectual development of every kid, leading to better results in school (better attendance) and most important of all, a better life.

I’m already looking forward to going back to Colombia, to continue to push for chess in schools, but most of all to see those smiling kids of “Pies Descalsos”. I also hope other consumer good companies will use chess as a marketing tool to promote their brands, let them follow JGB’s lead, it will be a good move!