What a long, strange trip it’s been, and the real adventure is just getting started.

Despite inclement weather, traffic, and an extensive commute, the American team has made it to the World Team Championship, scheduled to be held in Bursa, Turkey from January 5-14. This ten-team, round-robin event promises to be full of excitement and top-level chess with teams from America, Armenia, Azerbaijan, Brazil, Egypt, Greece, India, Israel, Russia and Turkey (full info here)

The participants are being hosted at the five-star Almira Hotel, and the tournament is at the nearby Merlinos Congress Centre. The organizers have spared no expense, including free lodging, food and transportation for participants.

Each team consists of four players, two alternates and a captain. As a young team with an above-average rating, the U.S. contingent is confident in their chances. GMs Hikaru Nakamura, Alex Onischuk, Yury Shulman, Varuzhan Akobian, Robert Hess and Ray Robson will be led into battle by IM John Donaldson. 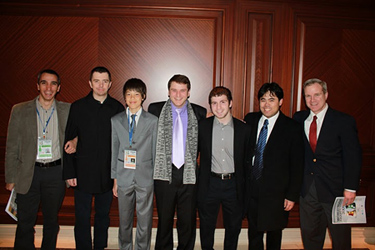 The US chess team in Turkey

The opening ceremony took place on Monday morning, and various state and chess officials thanked each team and promised to make this a memorable experience for all. FIDE President Kirsan Ilyumzhinov welcomed the players and thanked the Turkish Chess Federation for their efforts in organizing this event. Turkish Chess Federation President Ali Nihat Yazici also said a few words of appreciation as teams, dignitaries and reporters observed.

The drawing of lots utilized future soccer stars in a ingenious way; each youngster wore a green jersey over a white equivalent and team captains came forward, one at a time, to make a selection. The athlete removed the outer jersey to reveal the pairing number for that team. When the dust had settled, the seeds were:

Text with abbreviations by Tony Rich for CCSCSL. All photos Tony Rich.