The match took place February 2nd. At 10:30 CET the players shook hands at the train station of Atocha (Madrid) to give start to the match. The first game was played in the arrivals zone of the station, in which Karpov with white held Anand to a draw.

After that, both players climbed on the train to play a simul against 9 player who were among the passengers of the high speed AVE. At 13:30 CET the train arrived in Valencia at the Joaquin Sorolla station, where two players chosen by Anand and Karpov played against each other a game of “help chess” where they could ask the GMs for advice during the match.

The promotional day finished with yet another rapid game between Anand (white) and Karpov (black) which also finished draw.

“The train is a perfect place to play chess, the AVE Madrid – Valencia is 95 minutes travel and is fatastic for a game of chess,” commented Karpov.

The Anand – Karpov event was organized by the train system of Spain RENFE and was under the slogan “Caballo ganador” (the winning knight). The main idea : connect rapid chess with the rapid speed of the train, which moves at 350 km/h. 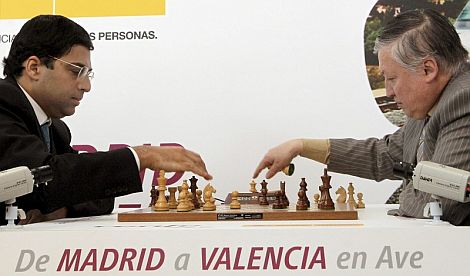 Anand and Karpov in their match

Simul of Anand in the train AVE Madrid – Valencia

Karpov as guest in Marca online

During the day of the promotional match Anatoly Karpov was official guest in the live chat of the largest sports newspaper online edition – Marca.com, with 2 million unique users daily. In one of the busiest hours of the day, Karpov answered questions for thousands of online readers. Here are some excerpts of the live chat.

Have you played against Boby Fisher? What was the result?

I have not had the fortune to ever play with him. I have a very high opinion on him as he was one of the best players in history.

What is your opinion on the level of chess in Spain?

Spain is one of the top countries in the world regarding the chess activity. You have notable players such as Vallejo, the world youth champion, Miguel Illescas. I think the Spanish federation is doing good work. It is possible that in the future you have players among top 10 in the world.

What is the suitable model for chess to be on television?

Internet is the television for chess. It allows live coverage of all games, and interaction at the same time.

Do you still think the arbiters decision in the match with Kasparov was against you?

The decision was clearly against me.

What is your best tournament ever?

I have good memories from many events. Above all, from my victory in Linares 1994. It was one of my most valuable victories according to experts. Most important of it, I had several points more than Kasparov.