Minute by minute updates on the events from Kazan

Welcome to the live blog coverage of the opening day of the Candidates matches 2011 on Chessdom.com! Today we will be following the opening ceremony and preliminary events from Kazan, with minute by minute updates that will appear in chronological order (note: refresh the page for the latest info).

And do not forget to follow the daily live video here

Video from the opening and the start of the Chess Academy 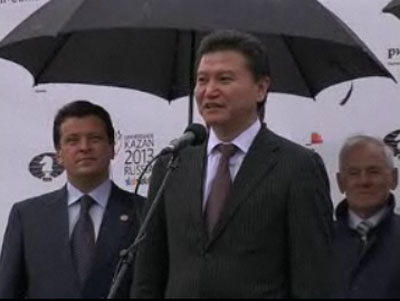 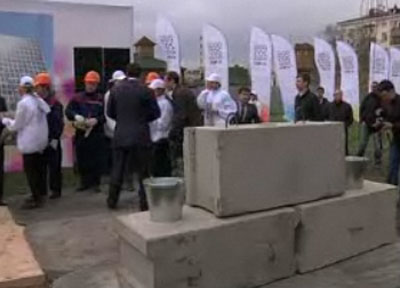 Placing of base stone of the chess academy in Kazan, Tatarstan

“Today is a special day for the whole chess world, we make the foundation of a wonderful building – The Palace of Chess – where will be the first World Chess Academy, a chess school, where professionals, arbiters, and trainers will be preparing,” said Kirsan Ilyumzhinov at the opening ceremony. “I want to give my special thanks for the collaboration of Tatarstan.”

At the ceremony more details about the chess palace were revealed. It will be 22 000 square meters and construction will be controlled by the Tatarstan President advisor Mintimer Shaimiev, who will also become one of the advisors of the FIDE President Kirsan Ilyumzhinov.

Drawing of colors is already a fact: Aronian, Mamedyarov, Kamsky, and Radjabov start with white. (more info coming in a minute)

Opening ceremony is now starting in Kazan! Stay tuned for all the details, drawing of colors, and more on Chessdom.com!

A reminder, videos will be published daily on the Candidates matches, at the Facebook page where you can become fan.

First details from the chess scene: the players will be separated from the audience with a glass wall. For providing more comfortable view for the audience, the games will be projected on a large screen inside the playing hall. All day long the preparation of the playing area has been going on, now more or less seems complete. The chess boards (see the picture below) have also be brought to the stage, and currently the video operators are setting up the cameras.

The press center is equiped with several computers with internet connection. A commentary chess board and a marker board are also available for the journalists, plus a screen for the live games. Exactly from this room will come the first information about the drawing of colors and details about the opening ceremony in just a few minutes.

More about the security measures: the metal detector for the visitors of Korston is placed near the entrance of the playing area. It seems to be operated by national guards, who make sure everything is in order with the personal attending the playing hall. All media and officials are required to wear identification badges, which are provided by the organizing committee. The badges have zoning, allowing the person to enter only in designated areas (the most common are Press Center and Spectators Zone, while the Doping Control area and VIP hall are generally restricted to officials).

When entering the playing hall, the chess fans are met by a poster that invites them to switch off all electronic devices. It also reminds the guests to take headphones for the live commentary by GM Rublevsky and GM Khalifman.

According to FIDE regulations, substituting players come from the Grand Prix. Thus, Magnus Carlsen was replaced by Alexander Grischuk.

Viewing exactly this, Dimitry Jakovenko is next in line for substitution in case any of the players cannot participate. Asked if he will be in Kazan, Jakovenko commented the day before the matches, “Why should I be? There is no chance for changes in the last moment.” He also commented on the possibilities of the candidates, and believes that Kramnik should be a clear favorite in the first part of the matches. 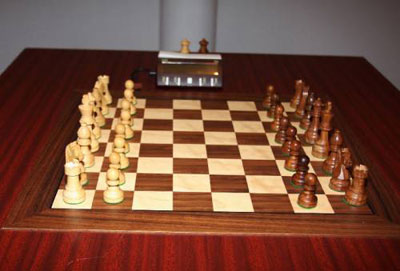 The most interesting topic discussed before the Candidates Matches opening ceremony was certainly the announced construction of a chess palace in Kazan. It will be in the form of chess king and will be between 20 and 25 floors high. Official information is still expected, but the construction site designated is already known.

The “chess palace” will include a large chess academy and will also play a key role for chess in the Universiade 2013 in Kazan. The value of the project is rummored to be around $50 million, and the construction time is 1,5-2,5 years.

Among the other interesting predictions from the last days: the President of the chess federation of Azerbaijan favors his players Radjabov and Mamedyarov, praising their solid preparation before the match. GM Danielsen expects hard battle in all matches, but believes experience might be more valuable than youth in these encounters. GM Artur Jussupow qualifies the matches as a “Russian roulette”, but points Aronian, Topalov, and Kramnik as slight favorites. Levon Aronian himself did not enter in predictions, but stated that “he expects to stay in Kazan for a while”.

In the last days multiple important chess figures have given their predictions for the Candidates matches. Among them was GM Nikita Vitiugov for the sports column of Alexander Kentler

Perhaps the most interesting quarter-final match. Although the odds of Levon Aronian’s overall victory in this tournament are high enough, this match it will be very difficult. Grischuk’s zeitnots will be testing for both players. Given the most powerful coaching team, Aronian’s chief advantage will be in the openings. If Grischuk can surprise him in this initial stage, then his chances are not worse.
Tiebreaks could be particularly pleasing for the observers as both players are excelling in the fast time controls.

Semi-finalists from the previous world championship cycle are both, for different reasons, in the shadow of their younger colleagues. Kamsky played in many massive Swiss tournament, while Topalov just got married and somewhat distanced from practical games. I think the match will be very productive and is likely to end within the regular games, without tiebreak. Naming the favourite is extremely difficult.

Initially, considering Kramnik’s huge experience in matches, is looked easy to predict the outcome of this match. However, Kramnik form in the recent times is not so convincing. It is not easy to predict how will Radjabov perform. Strong nerves of the Azerbaijani Grandmaster, coupled with a good opening preparation and short duration of the match, are telling that his chances should not be underestimated. I think the match will be very tense, and its outcome will be determined with one decided game.

Gelfand’s positive score from their earlier games can turn to be a detriment to either player. It is also unclear how will Mamedyarov’s six-months break reflect on his play. Perhaps the most unpredictable match.

The opening ceremony of Kazan Candidates Matches 2011 starts in 30 minutes. It will be held at the Balnii hall of Korston, the venue of the Candidates in the presence of the FIDE President Kirsan Ilyumzhinov, many official guests from Tatarstan region, the players and their teams.