Article by The Times of India

Any tournament is remembered for the memorable games it produces and the FIDE title norms it is able to produce. The Chennai Open 2011 is going to be remembered for the nine norms that it helped players to make in the eleven rounds that ran from January 18-26.

Players outside India are going to mark this event for repeat participation since three of the nine norms were made by overseas players. Nabaty Tamir of Israel and Zeng Chonsheng of China made 11-game and 9-game Grand Master norms.

R.A.Pradeep Kumar was the ‘find’ of the tournament. This Anna University student from MIT, Chennai made a 11-game International Master norm. “We owe all his success including the admission into the Engineering arena to the game of chess,” said his father modestly during the final round. 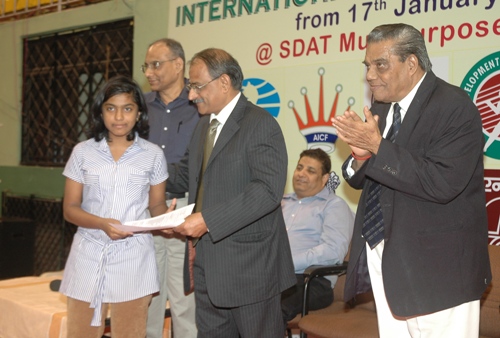 Michelle Catherina of Chennai needed a win in the final round against Somak Palit for a WGM norm. She did not win but made her maiden Woman International Master norm. She had defeated Grand Master Arun Prasad earlier in the event and hit the headlines.

Events with very few unrated players offer a better probability for norm seekers and this Chennai event had that blessing. The warmer Chennai weather also helped our players display their skills better. Most of the Chennai or southern Indian players are also underrated.

Nine norms made here at Chennai in 2011 will be the biggest advertisement for overseas players to come to Indian events coming up in September at Mumbai and Orissa or the Parsvnath and Chennai events of 2012.

The Times of India