The race between Israel and Iran continues

Ehsan Ghaem Maghami is the new Guinness record holder for simultaneous chess games. He faced more than 600 players in over 25 hours of simul. Of the total 614 games, Maghami won 590, lost eight and drew 16, walking a total distance of 55 kilometres as he moved from opponent to opponent.

“I am so happy to break the record, but now I have to break my sleep record,” AFP quoted Maghami saying. He said a physician, masseuse and a dietician were monitoring him. Ehsan Ghaem Maghami had a special nutrition program and took breaks of five to seven minutes at different intervals.

The race between Iran and Israel began in August 2010. Morteza Mahjoob (Iran) set the record in 500 games, after improving the Guiness achievement of GM Kiril Georgiev. This record was short lived, as the Israeli grandmaster, Alik Gershon, set a new one in October, playing 523 people over 19 hours, beating 454, losing 11 and drawing 58.

Having in mind that the last 3 records had average life span of 3 months, we can expect a new one coming soon. Ex record holder Mahjoob said, “Soon I will set a record. The title will remain Iranian since I will have a go at the record in the coming summer. I am determined and I will do it.” Alik Gershon does not stand behind and claims, “With some extra efforts I can beat even 1000 players simultaneously.”

Despite the harsh race, both sides have a common goal. After setting the record last year Gershon said, “Hopefully, all our wars against Iran will be on the chess board.” The new record holder Ehsan Ghaem Maghami commented that the Israel-Iran race is not the main factor here and added, “Let’s not talk politics… even if this record was held by another person, I would have gone all out to break it.” 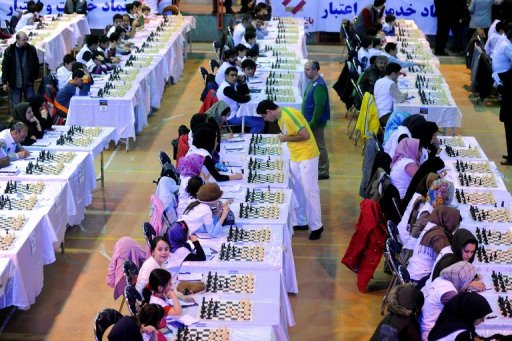 Ehsan Ghaem Maghami in action during the record
(photo agencies)

As were the cases of Kiril Georgiev, Mahjoob, and Alik Gershon, official recognition from Guiness requires 1 to 3 months to come. In an email to the respected author Dylan Loeb McClain, a representative of Guinness World Records, Damien Field, said that the group had received a claim on behalf of Mr. Maghami but that it was awaiting supporting evidence. For the record to be official, a player has to win at least 80 percent of the games. Opponents must meet certain minimum standards of skill — a requirement that was instituted after Mr. Gershon’s record was certified but it turned out some of his opponents were beginners.

Chess is in main stream media on a daily basis, with world agencies reporting on the most important aspects of the ancient game. However, it is rarely there on a massive scale except for events like the Anand – Topalov match or the World Youth Chess Championship. Having the political note in the race for the Guiness record certainly helps chess flood mainstream media one more time. The news was reported by AFP, ISNA, The New York Times, HJL, HRF, Inquirer, France24, etc.