FIDE was represented at the annual meetings of ARISF (Association of Recognized Sports Federations) and SportAccord. An agreement was signed with SportAccord for the inclusion of Chess in the SportAccord Mind Games that will be held in December 2011 in Beijing.

Many persons attended the FIDE stand in the Exhibition area and among those with whom discussions were held were WADA, Eurovision, Aon, FISU and Peace & Sport. Also preliminary talks were held with a potential Olympiad bidder. 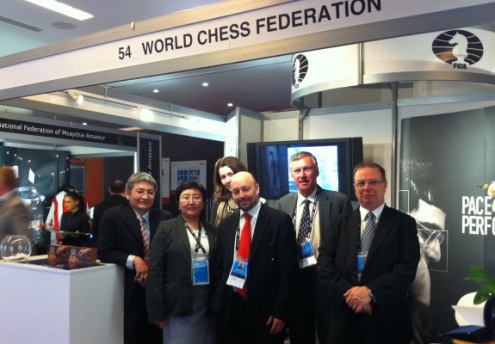 FIDE stand in the Exhibition area

There was a positive meeting with representatives of the IOC. Nigel Freeman, Geoffrey Borg and Berik Balgabaev met with Jean-Laurent Bourquin and Christian Wassmer of the Sports Department and informed them, among other things, of developments in Training and the programme of ‘Chess in Schools’.

The IOC representatives were pleased to see that the Olympiad had 144 member federations playing in Khanty-Mansiysk as this showed there was real activity in these federations.