Hou Yifan, the current Women’s World Chess Champion, has had to pull out of the Gibraltar Tradewise Chess Festival 2011 at the eleventh- hour. The young Chinese player informed the organizers of her decision, due to personal reasons because of critical illness in her family, as she was about to travel to the Rock for the tournament.

Tournament organizer Brian Callaghan obviously disappointed at the news, nonetheless said, he understood her decision: “Here in Gibraltar like in many other countries family comes first; and we fully understand Hou Yifan’s decision not to travel. Our thoughts and best wishes are with her at this time.”

Mr Callaghan said he was particularly grateful to the Chinese Chess Federation for helping arrange and agreeing to Hou Yifan’s visit to the Tradewise Chess Tournament in Gibraltar. Looking ahead to the tenth edition of the tournament next year Mr Callaghan said he very much look forward to welcoming her to Gibraltar in 2012.

Throughout this weekend players from all over the world have been arriving on the Rock for what promises to be the best competitive tournament yet.

As far as the men are concerned the ranking is also pretty much at the top level. The top ranked player is Vasily Ivanchuk from the Ukraine. British champion Michael Adams is back to defend the title he won here last year. Former World Championship finalist Nigel Short will also be playing. He was in Gibraltar nine years ago for the first tournament in 2003. Also returning for the second time is Fabiano Caruana the Italian Champion and Paco Vallejo the Spanish champion and last year’s finalist with Michael Adams.

The Festival starts on Monday with the Challengers and the Amateurs. The Gibraltar Masters starts on Tuesday 3pm. 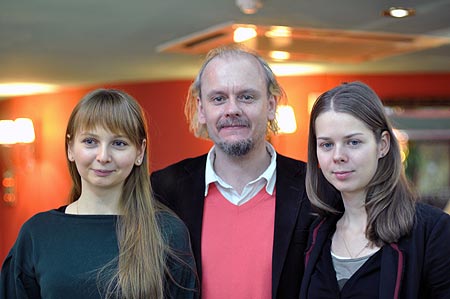 For players arriving on Sunday 23 January, a fun event was staged in
the evening. World number 4 and 5 women players Tatiana and Nadezhda
Kosintseva gave a tandem simultaneous display against 22 players. They
scored +20, =2, -0 and their victims included an IM!

The Challengers and Amateur events started today (Monday) and the
Masters event starts on Tuesday 25 January at 1500 (Gibraltar time,
which GMT+1).