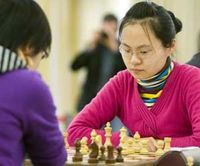 The North Shore Chess Center will be hosting a very special guest, WGM Ruan Lufei for a lecture series (this series previously featured IM Florin Felecan.) For those of you not familiar with this wonderful young lady, Ruan Lufei was the runner up in the 2010 Women’s World Chess Championship. She is also working on her PHD in Accounting at Carnegie-Mellon University. On her way to the World Championship final, Ruan’s victims included defending champion GM Alexandra Kosteniuk. She was finally stopped by her countrywoman of GM Yifan Hou in the tiebreak leg of the championship match.

Ruan will conduct a talk on her experiences at the Women’s World Chess Championship and her involvement in chess in general. She will review 2-3 of her favorite games from the tournament and take questions from the audience. The event will be held on Saturday March 12 starting at 4pm. There is no admission fee for members of the North Shore Chess Center and a $10 fee for non-members. You can join to become a member up to the time of the event.

The North Shore Chess Center is also working with the Winnetka Alliance for Early Childhood and sponsoring their annual TV Tune Out Week. What is TV Tune Out Week? It marks a time each year for families to evaluate the role that television and other screen play in their lives and to explore other options. A guide is sent to over 5500 homes with different options for families to partake in. As such the North Shore Chess Center from Monday March 7th through Friday March 11 will offer two time slots each afternoon / evening to provide free instruction to those wishing to learn how to play chess or improve their skills. Additionally from 12pm to 3pm on Saturday March 12, a member from the Warren Junior Scholars Program of the Illinois Chess Association will provide a free simultaneous exhibition to cap off TV Tune Out Week.