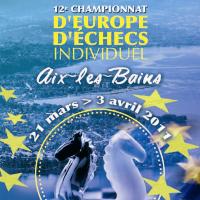 A few days ago Individual European Championship finished in Aix Les Bains (22.3-2.4.2011). The most successful Serbian player was Ivan Ivanisevic who finished on 27th place without defeat. Since the championship provides 23 invitations for the World Cup 2011, and some of the players already have a spot, the main issue in Serbia is whether Ivanisevic qualified or he is the first below the line.

According to the World Cup 2011 regulations the first spots are being given World Champion, then four semi-finalists of the previous World Cup, Women’s World Champion, and the last two World Junior Champions. After that there are 20 players by rating, (average for lists of 1st July 2010 and 1st January 2011) without inactive players. If someone qualified otherwise, before 1.1.2011 list is published, then he disappears from the ratings qualifiers.

This means that Peter Svidler and Dmitry Jakovenko are progressing to the World Cup according to high average rating. In addition, the new European Champion Vladimir Potkin and Azerbaijan’s Rauf Mamedov have already qualified from the last year’s European Championship in Rijeka.

The vacant four spots are to be filled by Luke McShane, Daniel Fridman, Alexander Motylev and indeed Ivan Ivanisevic. The official results are, however, subject of confirmation from FIDE and ECU.

In previous years, in case of large ties at the European Championships we had extra matches for the places that qualify for the World Cup. This time the matches were canceled and the additional criteria was something called performance rating.

FIDE calculates rating performance in a ridiculous way, but this time it is much worse. Specifically, the first tie break on the European Championship was a kind of middle rating performance, which is calculated by removing games played against the weakest and the strongest opponent by rating. Yes, It removes these ratings from the account for an average rating, but it removes the results, too. Players who defeat the strongest opponents are therefore drastically punished!

For example look at Grandmaster Mircea Parligras. He entered with 7.5 points in the division of places that link to the World Cup. He has the second best Buccholz in the whole tournament (only 5th placed Vallejo Pons has better Buccholz), actually all possible reasonable criteria indicate that he must be the best in the group which shares 16th to 44th place, but he eventually finished on 29th place and was not qualified for the World Cup! Why?

He is punished because he defeated the 2010 European champion Ian Nepomniachtchi (the opponent with the highest elo). Unbelievable! How long will people who have no basic logic understanding decide on major issues of chess? Therefore, I appeal to the FIDE President, that one of his six personal World Cup invitations be delivered to Parligras!

This is not the only illogical result. For example, the bronze medal was “stolen” from Moiseenko, as a penalty, because he won a strong player, McShane! Many players have been “awarded” since they lost against the strongest opponents. According to my calculations, Mircea Parligras, Baris Esen, Peter Heine Nielsen, and Ivan Saric are damaged for the place in the World Cup.