The World Chess Championship 2012 between the defending World Champion Viswanathan Anand and the challenger from the Candidates Matches Boris Gelfand will take place in May 2012 in Moscow, Russia. (Update 26th November: Match contract is signed).

In an official press release distributed by FIDE on August 8th we read: “The Federation Internationale des Echecs is pleased to announce that following the evaluation of the bids for the World Chess Championship Match 2012 and the recommendations by the World Championship and Olympiad Commission, it has awarded the organization of the match to the Russian Chess Federation. The match will be held in May 2012 in Moscow, Russia and offers the World Champion Vishwanthanan Anand from India, and the Challenger Boris Gelfand from Israel, a prize fund of 2,550,000 US dollars.” (see below full press release August 8th)

The news about the possibility the World Chess Championship 2012 to be in Moscow first broke on the pages of Chessdom in the end of June. It was accompanied by a possible interest by India and Israel. The interest of India materialized as half a month later India made a strong bid to host the event, while Israel remained only as rumor. However, India’s bid quickly lost pace after the deadline announced by FIDE, and after evaluation of the bids Russia and Moscow remained as the chosen venue for the WCC 2012.

As confirmed by FIDE, the prize fund of both bids was above the required 1 million. Thus, the driving force behind choosing Russia and Moscow to host Anand – Gelfand has been the further organization details proposed by the bidders for the WCC. 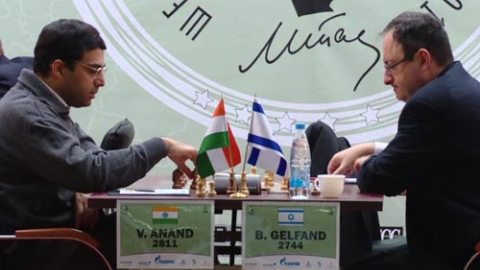 The news for the winning bid of Moscow coincides with the start of the Russian Super Final in the city. The last world championships organized in Moscow were the 1985 match between Kasparov and Karpov, and the 2002 knockout World Championship won by Ponomariov.

After publishing the initial press release, FIDE informed Chessdom.com that there will be changes in the upcoming hours. Our sources confirmed that the discussion and changes made in the press release could be regarding the option given to India to host the WCC 2013 (the host city Moscow and the general details were not questioned).

The August 9th press conference started at 12:00 in Moscow. Aruna Anand, wife and managed of Viswanathan Anand, has informed that they agree the match to take place in Moscow. Aruna and Anand are happy with the prize fund and the venue chosen. This information was confirmed by Kirsan Ilyumzhinov for Sport Express journalist Y. Vassilev. The FIDE President also confirmed that he has the agreement of the challenger Boris Gelfand as well, and with that there are no more obstacles for the match to take place in Moscow, as announced in the first press release from yesterday.

The prize fund of 2 550 000 USD has also been confirmed, as well as the information about the Yifan Hou – Humpy Koneru match published the day before.

In a press release update, FIDE has announced the venue of the World Chess Championship 2012 to be Skolkovo, the new modern technological center in Moscow. The special thanks in the press release is also updated, praising the efforts of the local government.

Having conducted the World Chess Championship 2010 in the home country of one of the participants has sparked large discussion in the chess world last year. Is it possible to guarantee neutrality? Does it give advantage to the home player? Or does it put pressure on him and give advantage to the other contender?

The smooth and professional organization of the WCC 2010 in Sofia might have opened a gate to a new era in the organization of the World Chess Championships and decreased the importance of the above questions. The conclusion of the event was simple and direct: a home country always provides the possibility for larger sponsorship (including state one) and higher interest in organizing the event.

Anand is a sure finalist at the World Championship 2012 and logically India was the first country to have expressed desire to organize the match. According to TOI, India’s decision to join the fray came after London withdrew its bid. India also has the agreement of Anand through his manager and wife Aruna, who said, “Anand has played three FIDE world championship matches in India and he has done well here.” 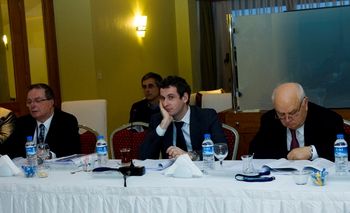 Ilya Levitov, one of FIDE’s vice Presidents and main figure in Russian chess, has confirmed in a recent interview for local media that the host country will very much depend on the winner of the Candidates Matches 2011.

If Aronian wins then Serge Sargsyan will surely be interested in hosting the event, if it is Radjabov or Mamedyarov then Azerbaijan comes to the stage. The Order Stara Planina and the new Presidential position at BCF for Silvio Danailov make Bulgaria a probable candidate for the World Championship 2012 as well, in case Topalov wins the match. Kamsky might bring the event to USA, while Grischuk or Kramnik will certainly spark interest in Russia.