The tradition of the Chessdom’s blitz report continues. Today we present you events from all over the World and some surprising facts from top level chess. If you want to stay tuned with the latest chess news, use our rss news subscription.

Before starting this report the Chessdom team wants to make a short announcement. We are looking for news reporters, live game commentators, and chess journalists who want to join our team. If you are interested, drop us an email. 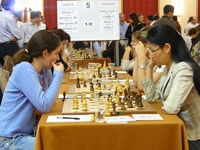 Yelena Dembo at action at the ETCC

Happy bithday to the top Greek female player Yelena Dembo! The Chessdom team wishes her all the best and to continue creating art on the chess board! Yelena got her first rating before she was 4 years old, by playing in a rated U12 event. She has many medals from European Youth and Women International championships, among them in 2002 she won the European Rapid U20 and she won the bronze at the Women’s European Individual Championship in Moldova 2005. Happy birthday Yelena! Chronia Pola!

This has been the top chess news of the week. We have a new youngest GM! This is GM Wesley So, who completed his third norm at the 3rd Prospero Pichay International Open held 1-7 December 2007 at the Duty Free Philippines in Manila. Welsey So finished with 6,0/9 at 4th place, which gave him the GM title. The event was won by the Ni Hua 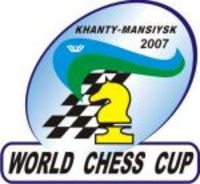 The Chess World Cup is entering in its final stages. The semi finalists are already known. GM Gata Kamsky defeated GM Ruslan Ponomariov with the clear strategy win with white draw with black. However, it was not that easy, as the first game Ponomariov had decisive advantage and Kamsky was lucky to get the draw. You can replay Kamsky Ponomariov and Ponomariov Kamsky, both commented live on Chessdom. The other commented match was GM Carlsen – GM Cheparinov. An exciting battle of the youngsters, where both showed great technique, but we had to have only one winner. This is GM Carlsen who advanced to the next round with a total score 1,5 – 0,5 (replay game 1 and game 2 with comments). Who had no problems qualifying was GM Shirov. The Spanish GM set the board on fire one more time and won his match 2-0. Shirov is the only one from the 128 players field to have won all his matches during the classical games and to have avoided tiebreaks. Who could not avoid them were Karjakin and Alekseev. In the second battle of the youngsters, the winner had to be decided by tibreak. GM Sergey Karjakin won his rapid match 1,5-0,5 against GM Alekseev and will face GM Shirov in the semi final.
This leaves us with 4 people who will engage Sunday morning (11 CET / 5 am EST) in an interesting fight for the World Cup. The games will be commented live on Chessdom.com and commentaries will start half an hour earlier. Do not miss it, Carlsen – Kamsky and Karjakin – Shirov live on Chessdom! 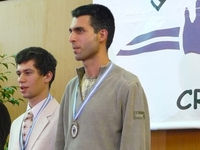 GM Delchev bronze at the ETCC

The 4th edition of the Open Masters of Benidorm is currently taking place in Spain. After 9 rounds leader is the bronze medalist from the ETCC, GM Aleksander Delchev with 7,5/9. Second place is for GM Alexei Dreev, IM Granero, and IM Sanches with 7,0/9.
In the parallel “tournament of the stars” GM Jobava Baadur is leading with 4,5/5, followed by GM Vladimir Malakhov with 4,0 and GM Vladislav Tkachiev with 3,0. Fourth place is for GM Sergey Fedorchuk with 2,0/5, fifth is FM Recuero with 1,0 and the last place is for WIM Vera Nebolsina with 0,5. Stay tuned for more information!