3 out of 3 in the last rounds for Topalov

Typically in his style, Veselin Topalov pulled the victory with a fantastic performance in the last rounds of the Chess Champions League in Vitoria. He won his last round game with black against Judith Polgar and secured the first place. The loss of Ponomariov against Kasimdzhanov left him 1,5 points clear on top, after Topalov was a full point behind several rounds before the end.

Right on the other pole was Ponomariov. He finished second with 5,5/10, but should be disappointed by the last rounds. After he lost the direct game with Topalov, he could not recover and lost today against Kasimdzhanov.

Anatoly Karpov got his sixth draw in the competition against Liviu-Dieter Nisipeanu. The ex world champion cannot be happy with his performance, but the result is not important. All the money collected from the event will be donated to a hospital in Congo. 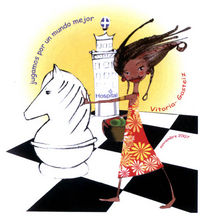