The 78th FIDE Congress held during the 38th Chess Olympiad taking place from 12 to 25 November 2008 in Dresden ended as another organizational triumph for the Turkish Chess Federation, representing one of the most rapidly developing chess countries in the world.

In the FIDE Congress, the election for hosting the 2012 Chess Olympiads were made which were won by Turkey (Istanbul) with 95 votes against 40 votes (1 vote not counted) of the other bid coming from Montenegro (Budva). 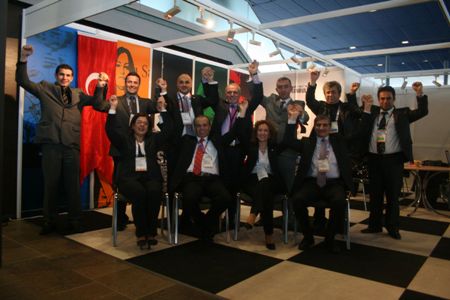 2012 Olympiad had a very strong governmental, bureaucratic and sponsors which played a major role in the election of Istanbul has a host.
Apart from Istanbul being one of the most attractive metropolitans into the world, the traffic jam problem is on the way to a clear-cut solution, which improved, compared to 2000.

The State Minister of Sport, Mr.Murat Başesgioğlu stated his personal support in the name of the Turkish Republic and the cabinet. His personal letter to the is going to be published later on.

The main sponsor of the TCF, İş Bank is giving its full support as ever but also there will be other sponsors for the 2012 Chess Olympiad. The Metropolitan Municipality of Istanbul, The Istanbul Chamber of Commerce, Istanbul Congress and Visitors Bureau are the other major sponsors.

The minimum planned budget is announced as the 7.5€ million but it is planned to be increased gradually. According to the legislation of Turkey, there will be special institution named for the Chess Olympiad 2012 which is going to be led by the State Minister himself as stated in his warranty letter.

Turkey: The Country in the Chess Boom

The number of the members of the federation has increased from 3.000 to 255.000 in about eight years with an increasing number of titled chess players. There are also some major successes among which Ekaterina Atalık’s European Individual title in 2006, Mikhail Gurevich’s participation to the World Cup and the Candidates Matches for Mexico 2007, Kübra Öztürk’s two consecutive European Under16 titles in 2006, 2007 and silver medal in the World Junior Ch., Cemil Can Ali Marandi’s European Under 10 title among many other youth and junior titles.

Ali Nihat Yazıcı, the president of the Turkish Chess Federation was the leader of the boom is now also Vice President of FIDE, respected among international circles and known as one of the most dynamic organizers in the chess world.