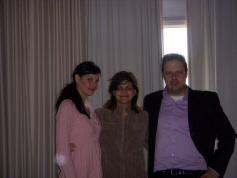 One of the two most famous and richest families from India participated in the 4th Games Festival and International School Chess Cup 2008, of which Chessdom.com was official media partner.

Birlas’ Family is, according Forbes’ billionaires’ list, number 76 in the world now. Everybody can evaluate better this position if we add that Silvio Berlusconi and Family are number 90 in the same list, George Soros is number 97, Rupert Murdoch number 107 and Giorgio Armani is number 203!

Birlas’ Family stayed in the brand new Presidential suite of Theophano Imperial Palace, one of the host hotels for the European Club Cup 2008. One of the family members Ms Ananyashree Birla participated in the Chess School Championship. The rest enjoyed other activities of the Games Festival.

Ms. Birla expressed her pleasure and best impressions for the well organized festival, the area’s natural beauties, hotels’ facilities and services. She has confirmed that soon they will come back to Halkidiki for other chess events.