Ivanchuk has gained more than 40 points since the last list 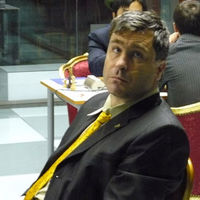 Vassily Ivanchuk has made a magic ELO jump since the April 2008 rating list. He has gained over 40 points in less than 2 months and has climbed to provisional position N3 in the rating list!

The rating jump for Ivanchuk has come from 3 events. At the recently concluded Mtel Masters 2008, he finished first with 8,0/10, demolishing the opposition in the first five rounds with 5,0/5. Earlier he played the Russian league with TPS Saransk (Saransk) and finished with 7,0/10.

The current leader is still the Indian Vishy Anand. However, he has gone below 2800 after a couple of unsuccessful games. Kramnik is second with no rating change. 4th place is a big dispute between Topalov and Carlsen. Carlsen has gained 11 points, while Topalov has won 10 in Sofia. Topalov is still a point ahead, but with the coming Foros tournament things may change.

Mentioning Foros Aerosvit 2008, Ivanchuk and Carlsen are among the top seeded (full list here). We will have daily live games on Chessdom.com, you can vote which player you want to see through this contact form.

Going back to the top rating list we find several nice surprises. Sergei Movsesian is 15th with 30 points gain after his successful campaign at the EICC. One of Baku’s starts GM Gashimov is also about to enter the top 20 with 30 points gain. And one thing that we saw coming several months ago – in top 30 there are 4 Chinese players – Ni Hua, Wang Yue, Bu Xiangzhi, and Wang Hao.

Note: Calculations based on the list of Hans Arild Runde that has now moved to http://heim.ifi.uio.no/~ha/toplist.php