Icelandic International Development Agency (ICEIDA) has announced N$80.000 sponsorship for the 2007 African Individual Chess Championships (AICC) to be held later this month at the Safari Court Hotel in Windhoek, Namibia.

The fruitful cooperation between Namibian Chess Federation and ICEIDA started two years ago, when Mr. Gísli Palsson initiated project of introducing chess into schools and support for amateur players. Iceland Chess Federation and Hrokurinn Chess Club were also involved in the project. 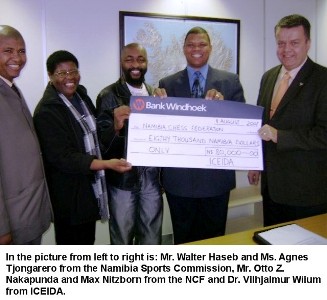 The crown to these efforts was seen when NCF was honored to host 2007 African Championship. ICEIDA immediately expanded the funding. Dr.Vilhjálmur Wiium, Director of ICEIDA and charge d’ Affairs of the Icelandic Embassy in Windhoek, explained during the contract signing ceremony that chess is very popular in his country and that Icelandic Government is keen to develop and educate the youth through chess. Iceland has the highest number of Grandmasters per capita in the world, and they are all paid by their Government to play chess.