Danailov, Lecheva, and Sergiev will attend the meeting 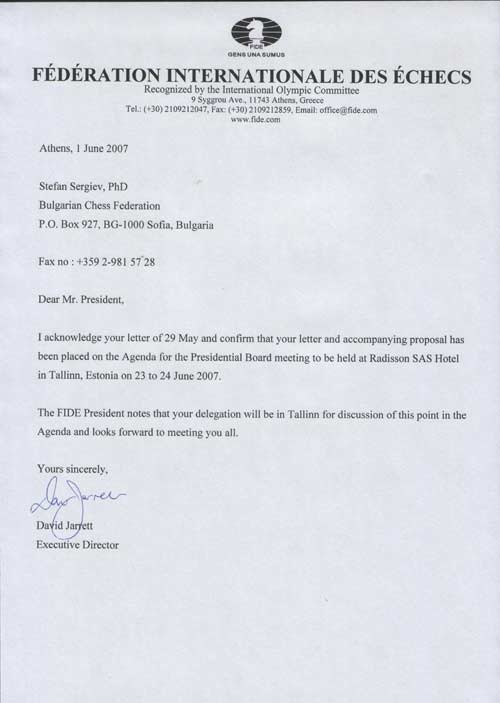 The case with the participation of the Bulgarian GM Veselin Topalov at the Wolrd Championship in Mexico 2007 has been included in the agenda of the Presidential Board of the World Chess Federation (FIDE), as reported by Topalov’s press-agent, Mr. Jivko Ginchev. The meeting of the Presidential Board will take place at the end of the month in Talin.

The letters by the Bulgarian Chess Federation

Two consecutive letters inform the President of FIDE that a Bulgarian delegation led by Silvio Danailov will attend the meeting in Talin starting June 22. The first one is sent on May 29. The first one informs FIDE of the future official visit by a Bulgarian delegation. It will consist of the Minister of Sports, the president of the Bulgarian Chess Federaion, and Danailov.
The second letter expresses the well known position of the Bulgarian Chess Federation on the absence of Topalov from the World Championship Cycle. The claim is clear, “with its last actions FIDE shows a bias attitude toward Veselin Topalov”.

Here is the full text of the two letters:

Copy to
FIDE Presidential Board

I am writing to you with the kind request to add to the agenda of the forthcoming Session of the Board of FIDE in Talin (Еstonia) an item for discussion and adoption of a resolution with reference to the proposal of the Bulgarian Chess Federation about modifications of the World Champions System for men and women, as well as the letters of the President of the Bulgarian Chess Federation Stefan Sergiev, PhD., of 03rd April and 31st May 2007 on this matter.

I believe that it is in our best interest to have the strongest chess-players participate in the world competitions, and the competitions are carried out in normal conditions and meet the expectations of the thousands of chess admirers from all over the world. Being tolerant toward one competitor to the prejudice of another is not in favor of the chess movement, neither are the constant changes of the rules, moreover during the run of one cycle.

Looking forward to your prompt reply to our letters,

Position of the Bulgarian Chess Federation

The forthcoming tournament for world championship in Mexico starting on 11th September 2007 represents the end of one cycle that extends over the period after the tournament in San Luis (Argentina). As it is well known, Veselin Topalov became World Champion there. Considering the great interest in the world he accepted to play a match with Vladimir Kramnik in Elista even though he was not obliged to do so. Moreover, Veselin Topalov agreed that the loser of that match would not be allowed to play in Mexico because, according to FIDE regulations, adopted on 10th January 2006, every former World Champion or a chess-player with a coefficient over 2,700 could, under certain conditions, challenge the World Champion to a match.

On the basis of this position, the Bulgarian party asked for a new match for the world title and provided the required amount of 2 million US dollars for the purpose. The arguments FIDE submitted against playing a match for the world title, for which all requirements were met, were not convincing. Arguments of the kind that the bank guarantees were from a bank FIDE doesn’t recognize and later on that the time was short for organizing and performing such a match demonstrated that FIDE would compromise its own decisions lead by interests that may differ from those of chess. In order to substantiate its position, in the meantime FIDE approved a new system for electing the World Champion, which goes contrary to the rules, because the regulations may not be modified within one cycle. In this way, Veselin Topalov was definitely deprived of the possibility to take part in the competitions for the world title.

A new system for organizing the world championships should be adopted only after a thorough discussion with the participation of a maximum number of national federations; this new system has to be voted on a FIDE congress and to come into effect during the following cycle. Any other action and decision is a breach of democracy, it is intended to favor certain interests and doesn’t contribute to the development of the chess game.

The Bulgarian Chess Federation believes that with its last actions FIDE shows a bias attitude toward Veselin Topalov – one of the strongest chess-players in the world. Depriving him of the possibility to participate in the competitions for world championship substantiates this belief.

Since Veselin Topalov was not allowed to play with V. Kramnik in 2007, it is most evident that he should be permitted to take part in the World Championship tournament in Mexico. In this way an injustice will be remedied – at least in part – and FIDE will prove that the world chess interests are its priority and that the World Champion should be elected in a competition between the best chess-players in the world. Any argumentation for the non-admission of V. Topalov is deprived of any logic. The second, the third and the forth players from St. Louis will play there but the first one will not! The second in the world ranking list, the chess-player who won 7 super-tournaments during the last 2 years will not be allowed to play there! Why? Only because FIDE has changed its system in the meantime?!

We suggest a FIDE resolution is passed for 9 participants to play in the tournament in Mexico. The organizers have no objections and they will be happy because Veselin Topalov is very popular not only in Mexico but in the whole of Latin America as well.