Two rounds will be played daily with ime control 25 minutes per player plus 10 seconds per move. One more time Bilbao is motor for changes and development in chess. This time the players will have a different scoring system: 3 points for every match won, 1 point for a draw and 0 for a defeat. Besides, Sofia Rules apply and the players are forbidden to agree a draw between themselves. Only the referee may decide whether a match is drawn, and it may only happen for one of the following three reasons: a triple repeat in positions; constant check or positions which are theoretically even.

Day one did not produce any full score matches. On board 1 Veselin Topalov and Judit Polgar exchanged victories with white. The current leaders emerged from boards 2 and 3. Magnus Carlsen got 4 points (a win and a draw) against Pentala Harikrishna, and Xiangzhi Bu did the same against Sergei Karjakin.

Tomorrow the two leaders will meet in a direct match. Polgar will play with Karjakin and Topalov will face Harikrishna. Games start at 18:30 local time and can be followed at http://bilbao07.soloajedrez.com 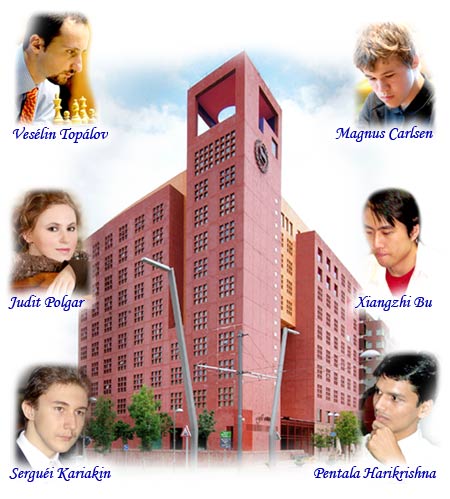