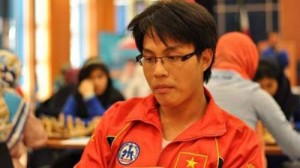 Huy competed in a double round robin GM section of the regular First Saturday events against other three GMs, one international master (IM) and one FIDE master (FM). A 10-game unbeaten run pushed him to his last norm for the GM title.

The victory earned Huy an additional 17 ELO-rating points, raising his ELO rating to 2,507 and qualifying him for the FIDE GM title, which requires three GM norms and a minimum ELO rating of 2,500.

The first norm was won at the 2003 Asian championship in Brunei 11 years ago as Huy took the U16 crown, while the second was snatched at the First Saturday arena in February 2013.

First Saturday is a monthly chess event that has been held in Budapest, Hungary since 1992. The primary purpose of the event is to give aspiring chess players opportunities to gain GM, IM norms and for Standard and Rapid ELO-rating points.

Following the First Saturday campaign, Huy will join teammates, Quang Liem, Truong Son and Nguyen Duc Hoa in the national team to compete in the 2014 Chess Olympiad to be held in Tromso, Norway from August 1-14.