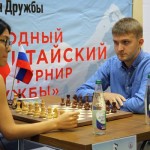 Russia-China Junior Match of Friendship was held at the Siberia Sanatorium (Altai Krai, Belokurikha) from July 14th till July 18th.

• A match between junior teams of Russia and China. Each team consists of 8 chess players (including at least 2 girls) born in 2004 or later.
Time control was 15 minutes per game plus 10 seconds per move.

On July 16th, the final four rounds of a traditional Match of Friendship between the youth teams of Russia and China (Scheveningen system, time control – 5 minutes for the whole game with an increment of 10 seconds per each move) were played in the famous Altai resort Belokurikha. The Russian schoolchildren won 5:3, 6:2, 6.5:1.5, and 5.5:2.5. The total score is 45.5-18.5 in favour of the Russian team.

Stefan Pogosyan showed the best result of all – 7.5 points out of 8. Volodar Murzin and Grigori Ponomarev scored 7 points each.
Team Russia won with 45,5-18,5.

• A grandmasters’ match between former Women’s World Chess Champion Hou Yifan (China) and Russian Vice-Champion Nikita Vitiugov.
On the first day four 15+10 rapid games were played, followed by 10 blitz games on the second day.
Vitiugov won both rapid with 2,5-1,5 and blitz games 3+2 with 6,5 -3-5. The total score was 9-5.