GM Nils Grandelius of Sweden prevailed in the tie break to win the crown in the Abu Dhabi Masters Chess Championship at the Sofitel Abu Dhabi Grand Corniche.

Tied with Grandelius at 7,0/9 points each are Martyn Kravtsiv of Ukraine, Baadur Jobava of Georgia, Alexander Areshchenko of Ukraine and Richard Rapport of Hungary.

Actually first to finish was the game between two erstwhile co-leaders, Ukarinian compatriots Martyn Kravtsiv and Alexander Areshchenko who drew by 3-time repetition of position in only 20 moves of their Sicilian Najdorf poisoned pawn game. The friendly truce allowed three others to share the top cash prizes.

Grandelius crushed the Slav defense of Vladimir Akopian of Armenia in a marathon 83 moves of a minor piece endgame. The Swede won the tie break by virtue of a higher average rating of opponents. 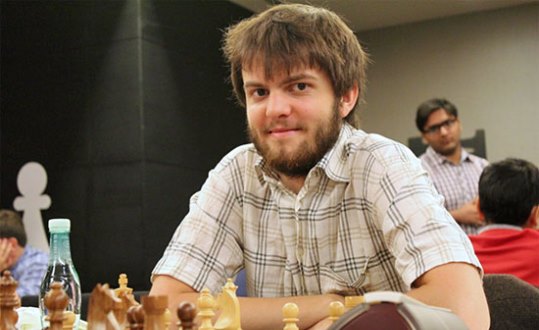 Baadur Jobava turned back the English Opening of Tigran Petrosian in 37 moves with an unstoppable queening pawn. Rapport veered away from book lines as he essayed a Queen’s pawn opening against Dariusz Swiercz and won in 72 moves threatening pawn promotion.

Tied at 6.5 points each are GM Saleh A.R. Salem of the UAE, Abhijeet Gupta of India, the only two Asians landing in the prize money, Peter Prohaszka of Hungary and Gawain Jones of England.

A total of $36,600 in cash prizes is distributed to the top ten placers.