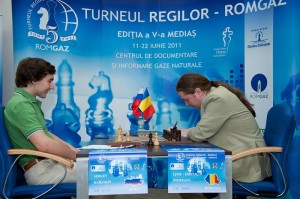 Bazna Kings 2012 will be one of the strongest round robin tournaments of the year. With Carlsen, Anand, Radjabov, Ivanchuk, and Karjakin the top players of the event will have ELO average of 2790! To them will join the local star, European Champion, and World Championship semi-finalist GM Liviu-Dieter Nisipeanu.

Nisipeanu has participated in the last 3 editions of Bazna Kings, review his last year game with Karjakin here (video), with Carlsen (here), and with Nakamura (here).

Chessdom.com will have daily coverage of the event with live GM and computer analysis, videos, and news. The best games will be published also in the CEWN chess magazine.

Liviu-Dieter Nisipeanu had his peak FIDE rating was 2707 in October 2005, when he was ranked fifteenth in the world, and the highest ranked Romanian player ever. Noted for his risky, almost paradoxical play; he is frequently called a student of Mikhail Tal.

In 1999, Nisipeanu as a clear outsider made it to the semifinals of the FIDE World Chess Championship by beating Vasily Ivanchuk in round 4 and Alexei Shirov in the quarterfinals only to lose to the eventual champion Alexander Khalifman. Nisipeanu won the European Individual Chess Championship 2005 in Warsaw with 10 points out of 13 games, half a point ahead of runner-up Teimour Radjabov from Azerbaijan.

Nisipeanu was also participant in strong events as Mtel Masters, and he was one of the first Grandmasters to be interviewed by Chessdom.