He joined top seeds Aleksandrov Aleksej of Belarus, Kravtsiv Martyn of Ukraine and Andrei Deviatkin of Russia, along with fourth round leaders IM Vidit Santosh Gujrati of Maharashtra and Bangladesh GM Ziaur Rahman to lead with 4.5 points each.

The English opening between Shardul and Abdulla went on without much hiccup and towards the end, both had time pressure. Surprisingly, Shardul played a calm and neat game, whereas Abdulla wilted under time pressure to concede the game a point in 40 moves. The important win must enhance the second IM norm chances of Shardul. 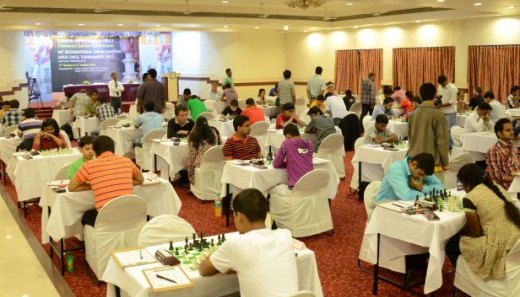 In the Slav defence employed by Ziaur against Vidit, the attack by Ziaur with his queen and knight was well nullified by Vidit and both signed the piece treaty in 24 moves.

Former Asian Junior champion P. Karthikeyan of PSPB declined the queen’s gambit by Aleksandrov and offered a bishop for a pawn, which was not accepted by his opponent. After exchanging the queens on move 28, Aleksandrov set up a good position forcing Karthikeyan to lose exchange or piece. Karthikeyan resigned five moves later.

In a Ruy Lopez opening, Kravtsiv gained a rook of Railways’ IM Saptarshi Roy for his knight on 18th move. His c-file pawn marched forward to seventh rank, supported by his dark coloured bishop. Saptarshi resigned, when he faced with a loss of material. 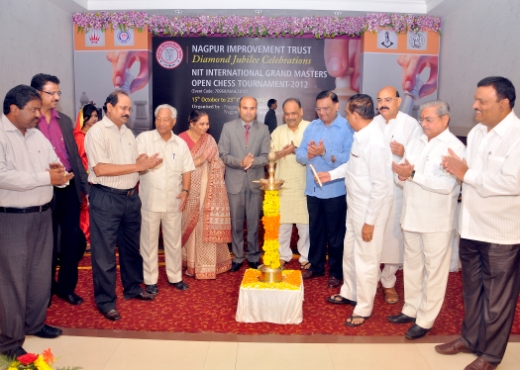 Detail from the opening ceremony

In a Kings Indian defence, IM S. Nitin of Tamil Nadu suffered a loss at the hands of Sahaj Grover of Delhi, whose GM title has been approved at the recent FIDE Congress at Istanbul.

The queen and knight of Deviatkin Andrei from Russia had a better combination than the queen and bishop of IM P. Konguvel of PSPB, helping the former to grab a point in 38 moves.

Nagpur’s prominent players IM Anup Deshmukh, Gurpreet Singh Maras and Akash Thakur bounced back strongly to defeat their respective opponents, to collect 3 points in five games. Vidharbha’s another IM Swapnil Dhopade had a bad day, scoring half a point from two games of the day.