He is followed by five other players including Vidit Santosh Gujarti of Maharashtra and top seed Aleksandrov Aleksej of Belarus, with five points each.

In an absorbing game, Shardul started with Catalan opening and offered to exchange the queens on move 25. His opponent Kravtsiv, having an extra pawn rejected it. His b- and c- pawns had a steady march towards the eighth rank, which was effectively controlled by Shardul. 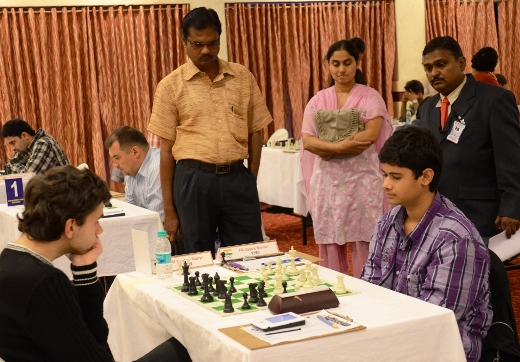 Kravtsiv Martyn of Ukraine (left) is leading with 5.5 points

After exchanging the queens on move 36, Shardul tried to repeat the position aiming for a draw. But, Kravtsiv avoided it and used his resources to eliminate his opponent’s bishop and won after a marathon 77 moves.

In another interesting game of Polish defence, Aleksej defended stoutly against Ziaur Rahman of Bangladesh to extricate half a point. Though Ziaur Rahman had two pawns with a white bishop, Alexej managed a draw with his opposite colour bishop. Ziaur is also on the second spot with 5 points.

Former under 25 national champion Himanshu Sharma crushed Asian Junior champion N. Srinath of Tamil Nadu in a Sicilian defence with two extra minor pieces on the board, to raise his tally to 5 points.

In the Slav defence, former world under 14 champion Vidit traded the queens with Andrei Deviatkin of Russia in the thirteenth move. Though he gained a pawn, there was no breakthrough and both agreed for a draw in 23 moves. Both have five points each. 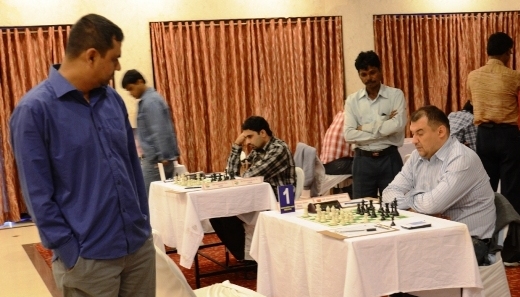 GM-elect Sahaj Grover of Delhi had to concede half a point to Maharashtra IM Ankit Rajapara in a French defence.

Former national under 25 and blitz champion RR Laxman of ICF had to lose a valuable point, when his mobile phone rang in his game with IM Vikramaditya Kulkarni of Maharashtra, playing for Railways.