Five players shared the lead with 6.5 points each, at the end of the eighth round of the NIT International Grandmasters Open Chess Tournament, organised by Nagpur Improvement Trust at Naivedhyam Recreation Centre, Nagpur today.

With three more rounds remaining to be played in the next three days, the heat intensified to fight for the top honours.

Maharashtra’s Vidit Santosh Gujrati kept himself among the five leaders, others being Aleksandrov Aleksej of Belarus, Kravtsiv Martyn of Ukraine, GM Ziaur Rahman from Bangladesh and GA Stany of Karnataka.

Vidit enhanced his GM norm chances by making a quick draw with GM Lalith Babu on the second board. He needs another half a point in the next round, to secure a nine game norm. 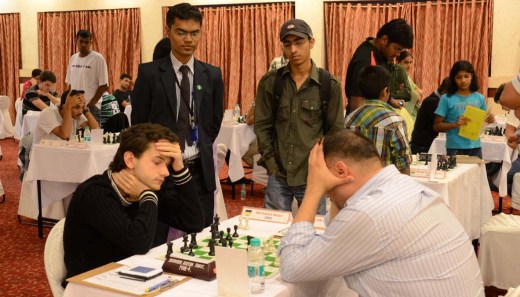 The derby match between Kravtsiv and Aleksandrov

In the clash between the top two seeds, second seeded Kravtsiv had only a rook against a bishop and knight of Aleksandrov. Inspite of the handicap, he managed to draw the game after a well fought moves.

GM Ziaur Rahman from Bangladesh gained a pawn on 10th move in a Slav defence against Mumbai IM Prasanna Rao. Towards the end game, Ziaur posted his two knights in superior positions and combined his rook to force a checkmate in 38 moves.

The surprise joint leader Stany, who has been conferred with IM title in the recent FIDE congress mopped up three pawns in the queen side of his opponent Akshayraj Kore of Maharashtra. The win then was only a matter of time. 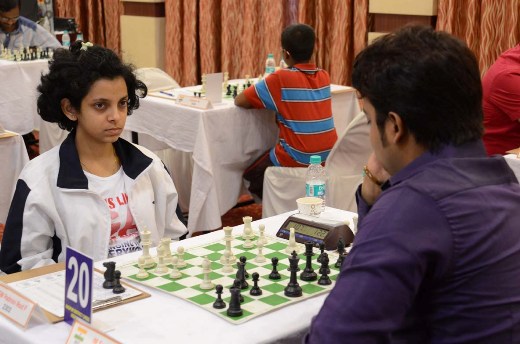 IM Vikramaditya Kulkarni of Maharashtra and representing Railways, built a commanding position based on Bangladesh GM Enamul Hussain’s miscalculated Nxb5. It led to the loss of game by Enamul on move 28.

In a Sicilian defence, USA GM Ziatdinov Raset won the exchange against former under 17 national champion IM P. Shyam Nikil of Tamil Nadu to score a win in 36 moves.

In the Paulsen variation of Sicilian defence, woman grandmaster Padmini Rout of Orissa demolished the defence of Railways IM Saptarshi Roy to register a facile win in 30 moves.