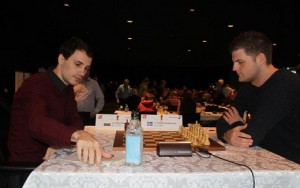 Both top boards games in Reykjavik where the leaders faced each other finished with draws. Now the number of players on the top has increased from four to six, all with a 4.5/5 score.

After the early 18-move draw between Grzegorz Gajewski and Yu Yangyi, there were still two players that could have gotten the coveted fifth straight victory. Maxime Vachier-Lagrave had a slight edge in an endgame against Pavel Eljanov, but was not able to convert it into a full point.

The game started with Maxime’s beloved Grunfeld Defense. Eljanov decided to go for some early simplifications, trying to exchange black’s important dark-squared bishop. He managed to do so, however the resulting endgame was pretty equal. The French GM activated his pieces but that never seemed to be quite enough to get the win. Draw in 36 moves.

Taking advantage of this result, Bulgarian GM Ivan Cheparinov now joined the leaders after defeating Icelandic GM Stefan Kristjansson with the black pieces on the fourth board.