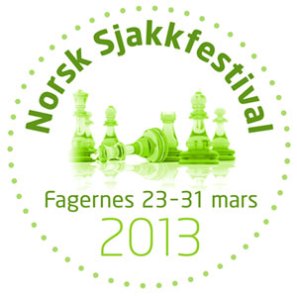 The Festival is being held during the Easter week, and the program includes the 2013 Open Norwegian Championship, Fagernes Grand Prix, Fagernes Easter Blitz and two Children’s Tournaments.

Group C:
Wednesday 27 – Sunday 31 March
Open to players with a rating below 1250 or with no rating. (Some unrated players may also be allowed into group A or B if previous results indicate this.)
7-round tournament, for Norwegian national rating.
40 moves in 1½ hours, plus 30 minutes extra to finish.

Fagernes Grand Prix 2013 is an open tournament which will take place from 24th to 26th March with all players in one group. The tournament will be played over five rounds of Swiss system with the time control 60 min for 40 moves and 30 minutes extra to finish the game.

Two open Children’s Tournaments on Sunday 24th March and Wednesday 27th March. Each separate tournament has 5 rounds and 20 minutes thinking time for each player and game.