The first seed of the Young Grandmasters Tournament for women Olga Girya had a slightly bumpy start. She lost surprisingly against the Mongolian WIM Altanulzii Enkhtuul, and after 4 rounds, has 2/4 points and is 1.5 points behind the sole leader. She talked to the official website, mostly about her loss against Enkhtuul. 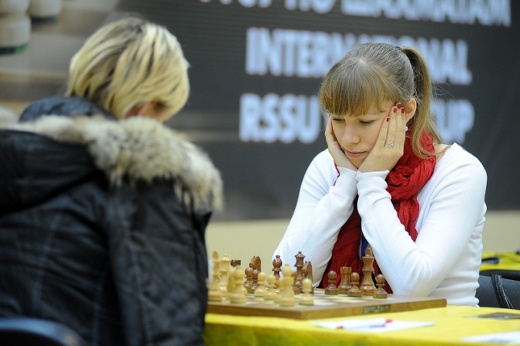 – Sometimes, in life you are you own worst enemy. I cannot say that I have underestimated my opponent, but for some reason I deliberately weakened my position. I saw that it was not a best development, but I still made the move.

– It sounds rather upsetting…

– Well, it is history now, tomorrow will be a new day.

– How do you like the atmosphere at the tournament this year?

– I really like the Moscow Open. It always attract many interesting people, it is a pleasure to play here. But I guess I still have to improve my consistency.

– Nonetheless, you still have strength to smile…

– Well, I guess I am not very good at it… Olga shakes her head.

– You are one of the current candidates for the national team, after the Kosintsevas sisters refused to play at the World Team Championships. What do you think about your chances?

– There will be a training camp with three candidates competing for just one spot. In addition to me, it will be Nastya Bodnaruk and Sasha Goryachkina. Then the coaches will decide whom to send to the tournament.

– You still have six rounds left to rectify the situation and show the coaches that you are the one to back.