The Oliver Gonzalez Chess Memorial is starting in Madrid this Saturday, with the aim of organising one of the most prominent opens in Spain and, more importantly, honouring the memory of our friend Oliver Gonzalez Somoza (1981-2009).

At regional level, Oliver was one of the strongest players of his generation. In 2007 he became a FIDE Master and won the National Championship among university students. With his team “Virgen de Atocha” he won several regional leagues and in 2008 he scored the final point in the National League that lead the team to promote to the 1st Division. 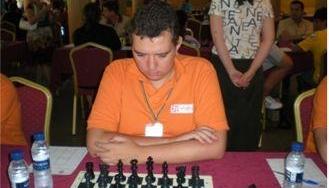 Oliver Gonzalez, playing for "Virgen de Atocha" in the National League in 2008

Oliver was diagnosed with leukemia in the autumn of 2004. He faced his disease with very much courage, looking forward to the future with optimism all the time. Even in the most painful moments he always had a smile for his family and friends, trying to make their lives happier.

You can realise what a fighter person he was by looking at his elo graph: instead of being depressed with the illness he improved a lot during those years, playing every game as if it was the last one. He was the heart of the team, always motivating his teammates and teaching us to understand the importance of the game called life.

Oli, the chessplayers from Madrid will never forget you.

Director of the Memorial
Leonardo Perez-Aranda