Former Under 16 world champion SP Sethuraman and former Under 14 world champion Vidit Santosh Gujrathi, the joint top seeds of the tournament, each with an Elo rating of 2651, registered facile wins in the first round of the ONGC National Premier Chess Championship, organised by Tiruvarur District Chess Association, which kicked off at Hotel Kasi’s Inn, Tiruvarur, today.

IM P. Karthikeyan and K Rathnakaran of Railways and GM M Shyam Sundar of Airport Authority of India also landed on the winning side in the inaugural round.

The tournament is a 14 player round robin system, with a prize fund of Rs.ten lakhs. It boasts eight GMs, five IMs and one FM, with an average rating of 2501, which belongs to Category 11, the first of such kind for a national championship in India. 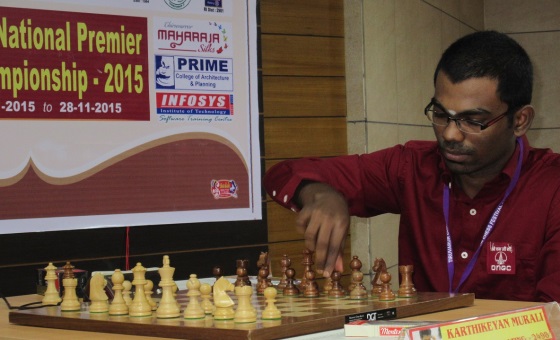 In the Taimanov variation of Sicilian defence adopted by former under 16 world champion SP Sethuraman of PSPB played a positional game to outwit his state mate Karthikeyan Murali from Tamil Nadu. After losing a pawn on 27th move, though Karthikeyan combined his knight, rooks and queen to threaten Sethuraman’s king on the open file, the latter never felt the pressure and picked up another pawn on 35th move. Karthikeyan gave up the fight after 43 moves.

Vidit Santosh Gujrathi recorded the first win of the championship, employing Caro Kann defence against the lowest seeded player of the championship, K Praneeth Surya of Telangana. Praneeth started well, preventing his opponent’s king from castling. He even offered some minor piece sacrifice, but Vidit consolidated his position slowly. A weak Qh3 on the 17th turn by Praneeth forced him to lose a piece and after a couple of moves, Praneeth was left with 45 seconds on his clock compared to one hour and fifteen minutes to that of Vidit. Praneeth’s few more incorrect moves cost him the game, after 36 moves.

In the fight between two grandmasters, M Shyam Sundar dealt a blow to higher seeded Abhijit Kunte of PSPB, a former British champion. Kunte, playing English opening, overlooked a crucial pawn loss on 31st move to hand over an advantage to Shyam. The two active rooks of Shyam played a stellar role in pocketing a point for him.

Former Under 17 national champion P. Shyaamnikhil of Tamil Nadu build up a good advantage against the Alapin variation of Sicilian defence by K Rathnakaran of Railways, right from the opening. Though Rathnakaran had the open e- file under his control, Shyaam seized it from him and also broke open his opponent’s king side. But, the overall slight advantage held by Shyaam was of no use, when he ran short of time and he was adrift by ten moves when he had to complete the first 40 moves in the first time control.

Former Asian Junior champion P. Karthikeyan of Railways sacrificed his knight on 12th move, facilitating him to win exchange after two more moves in a Slav defence played by grandmaster MR Venkatesh of PSPB. Though Venkatesh defended accurately, he had to lose two valuable pawns during the process of revival. Karthikeyan pseudo sacrificed his knight to disconnect Venkatesh’s pawns and his two extra pawns in the end game were vital to subdue Venkatesh in 50 moves.

In a bishop vs knight end game between former under 12 world champion Deep Sengupta of PSPB and Swapnil Dhopade of Railways, awaiting for his GM title agreed for a draw after 46 moves.

The semi Slav defence arising from the Queens gambit declined game between GM Neelotpal Das of PSPB and IM Arghyadip Das of Railways petered out into a draw after 27 moves. When Neelotpal was trying to force a win, Arghyadip exposed his opponent’s unprotected king to perpetual check and grabbed half a point in 27 moves.