Magnus Carlsen took the world by storm as a child prodigy, becoming an international Grand Master at 13. At 19, he was the youngest chess player to be ranked number one in the world, and at 22, in November 2013, he defeated five-time former world champion Viswanathan Anand. Now, at age 23, Magnus holds a record rating of 2872. 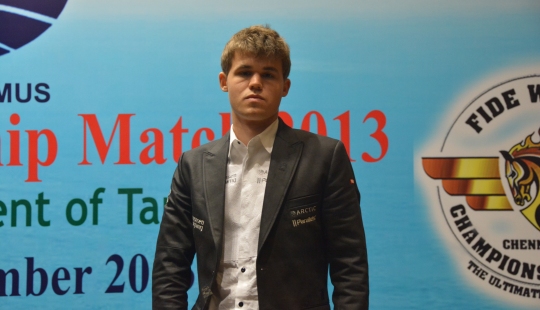 Don’t miss this chance of a lifetime to meet and be inspired by Magnus. He will be interviewed by entrepreneur and investor Peter Thiel, former US-rated Chess Master with a lifelong passion for chess.

Topics covered will include Magnus’s views on the game, his experience winning the championship, and the role he believes chess can play in advancing young people’s critical thinking, social skills, and ability to achieve academically.

Prior to the onstage program, Magnus will play blindfolded in a six-board simultaneous chess demonstration. Participate in a drawing benefiting First Move, a dynamic non-profit organization that brings chess to second and third graders across the country – and possibly become one of the six brave players if you dare!