The official opening ceremony of the FIDE World Chess Championship Match between the reigning champion Magnus Carlsen (Norway) and the challenger and former World Champion Vishwanathan Anand (India) took place at the Congress Hall of the Radisson Blu hotel in Sochi on November 7th, 2014.

Russian People’s Artist Sergey Makovetsky and Alexandra Kosteniuk were hosts of the ceremony. 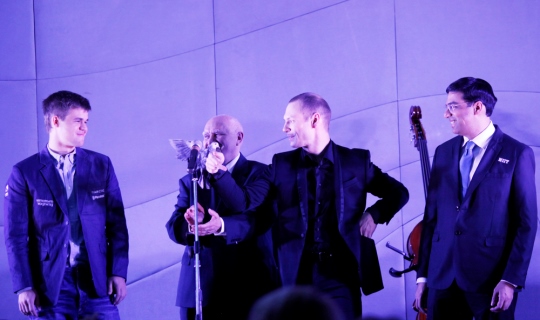 Igor Levitin read out the welcome address of the Russian President Vladimir Putin:

“Russia deserves the honour of holding this important and prestigious event. Our country has won wide recognition for its chess school and has extensive experience at holding events of this level, all the more so as this championship match is taking place in Sochi, which hosted the Winter Olympics earlier this year.

I am confident that Sochi’s developed sports, transport and tourism infrastructure and the traditional hospitality of its residents will ensure that this event takes place at the highest standard and will enable the competitors – Magnus Carlsen and Viswanathan Anand – to demonstrate the full measure of their skill and ability to find original solutions to the most complex tasks and show that they are worthy rivals in this battle for the chess world’s crown.”

Kirsan Ilyumzhinov on behalf of the FIDE Presidential Board (the International Chess Federation unites 181 countries) sent greetings to the guests of the championship. He revealed a rich competitive and cultural agenda during the championship – the Tal Memorial grandmaster blitz tournament, junior Tournament of champions, master-classes, simultaneous displays, etc. In the end Mr. Ilyumzhinov wished good luck to the match participants and expressed hope for brilliant and exciting games. 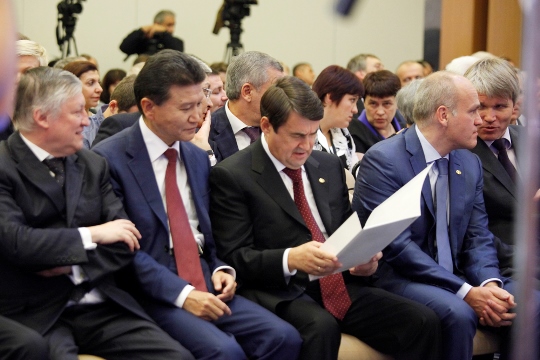 Igor Levitin awarded the Russian players with state decorations. The order “For Merit to the Fatherland” of the 1st class was given to Alexandra Kosteniuk, Natalia Pogonina received this order of the 2nd class. Olga Girya and Sergey Rublevsky received Honorary Mentions of the Russian President. These players and the Russian women’s team coach got their awards for winning the 2014 Chess Olympiad in Tromso, Norway as well as for their contribution to chess development in our country.

After the mime show “Dance of chess queens” the Chief Arbiter of the match Andrzej Filipowicz (Poland) called for the drawing of lots. Vishy Anand will have the white pieces in the first game. The first move of the World Chess Championship match will be played tomorrow, November 8th, at 3 pm local time.

The grandmasters will play 12 games with classical time control: 120 minutes for 40 moves, then 60 minutes for 20 moves, and then 15 minutes plus 30 seconds per move for the rest of the game. If the match is tied, the tie-break with quick time controls will take place on November 27th.

The ceremony was concluded with the concert of a singer Tina Kuznetsova and the Jazz Quartet of People’s Artist of Russia Igor Butman. 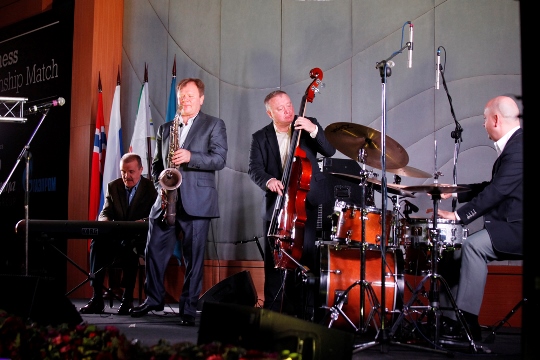