After consultations with the family of Håvard Vederhus, the organizer of Oslo Chess International has decided that the 2013 edition will be played as a memorial tournament and given the sub heading Håvard Vederhus’ memorial.

Håvard Vederhus (born November 10th 1989) was as a child a talented chess player. He took fourth place in the Under-11 class in the Norwegian championship at Gausdal in 1999, beating the one year younger Magnus Carlsen in the process.
Håvard continued played the Norwegian championship and remained an active member of Oslo club SK 1911 until the age of 16. His father and older brother were also members of this club.

Next to studies, music and christian engagements Håvard’s life was later dominated by politics. He became leader of AUF in Oslo, the Norwegian Labour Party’s youth organization, and was considered one of the party’s greatest young talents when he was shot and killed at Utøya during the terror attack July 22nd 2011.

Oslo Chess International is meant to be a tournament for both the elite and the masses. As a chess player Håvard Vederhus belonged to the latter, as he chose to apply his talents in other arenas. By this he became a good example of a man who in his youth enjoyed chess and the chess community, bringing him experiences and lessons to be applied later in life.

His premature death was a great loss also to his many friends in the Norwegian chess community. The organizer, who has recently written a biography on Håvard, wishes to highlight this during Oslo Chess International. 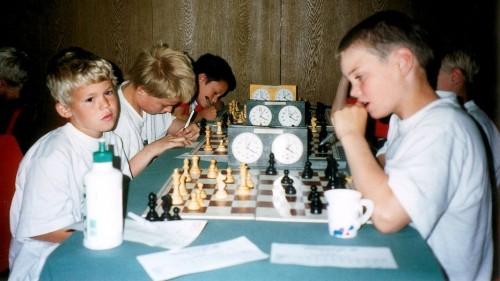 Magnus Carlsen vs Håvard Vederhus in 1999