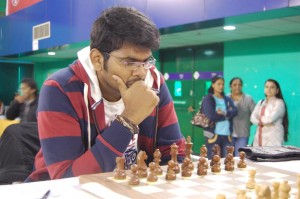 Petroleum Sports Promotion Board won the HCA 33rd National Team Chess Championship with a round to spare. PSPB fielding an all GMs team won all their matches and finished with 18 match points from 9 matches.

Indian Railways B and A team finished 2nd and 3rd respectively with 14 and 13 match points to their credit. PSPB beat Air India on the top board in the final round with a 3.5 – 0.5 score with only a draw coming from the 2nd board truce between GM Adhiban and IM Chandrashekhar Gokhale.

GM Abhijeet Gupta‘s invasion through the b-file on the 26th move was so swift, his opponent Satyapragyan’s counter attack never came to lime light and the game ended in 33 moves when material loss was inevitable.

LIC of India drew with Railways A on all the boards of the 2nd table , enabling the sibling Indian Railway B team to finish runner up who beat Tamilnadu A with a 3.5 – 0.5 score.