Things are getting hectic here in Paris. Although the first two rounds had been tense enough, some could have complained about the high drawing rate. The third round had it all: complicated battles and more decisive games than in the previous days taken together, all with the white pieces!

Ever since Capablanca’s sceptical claim that the game of chess is about to be exhausted, chess lovers have been marred by such metaphysical questions: will there be forever room for improvisation, are there other new things under the sun than the well forgotten ones, how many tabula rasa would be left?

From a pure chess point of view, practice offers contradictory answers and I would not enter dangerous controversies, but the third round pairing certainly offered us a blank page needing to be filled: the fourth board opponents, Caruana and Fressinet, had never met in a classical game before, which is kind of rare for elite chess! 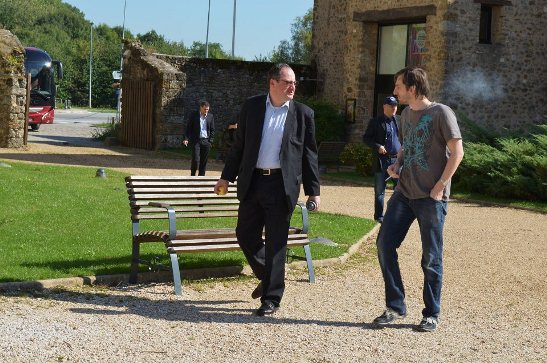 In an Anti-Marshall with 8.a4 queens were quickly exchanged leaving White a slight advantage:

In the diagrammed position Black seems to be doing not so bad, but after 21.Rc1! Nd7 22.Bxe6 Rxe6 23.Nb3! White managed to expel the active rook from d2 and the further 23…Rdd6 24.c3! highlighted the weaknesses in Black’s camp, to which Black eventually succumbed.

Fressinet was especially unhappy about his move 14…Bg4 but praised the play of his opponent. 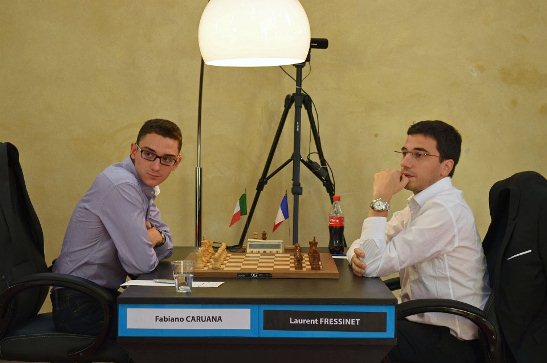 Ivanchuk continued his series of uninterrupted Whites against Wang Hao with the fifth one (in classical encounters). True, things did not work out quite well for him in the opening and he saw himself struggling against Black’s bishops’ pair.

The French opening turned out successfully for Wang Hao. After the queens’ exchange, the endgame could only be better for Black. Wang Hao indeed managed to get a serious advantage but around the 4th hour the Chinese suffered what he said was ‘a lack of concentration’ which made him ‘miss many tricks and variations’.

At move 46 it was already White who was playing for the win but as Ivanchuk showed in the press conference, Black could have saved himself with: 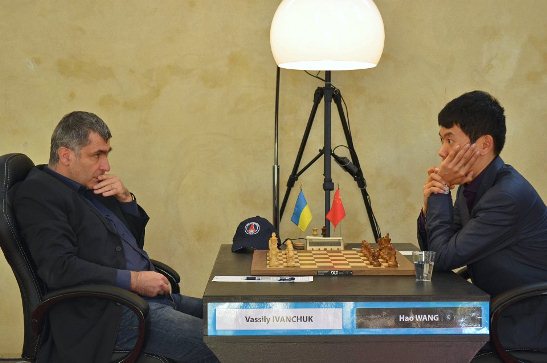 The fifth game ever between Giri and Tomashevsky ended with the same result as all the previous ones, a draw.

Just like Caruana did in his game, Anish Giri politely declined the invitation to the Marshall attack but chose the Anti-Marshall with 8.h3 instead.

Tomashevsky proved up to the task. In a line previously thought to be slightly unpleasant for Black, Evgeny showed there was in fact little to fear. As a result the players were the first to leave the playing hall with half a point each.

And of course, the sixth board produced just another decisive game. This time the winner was Nakamura (at the expense of Bacrot) who had been trying so hard to break the ice in the previous rounds. We could also add that this has been a black day for the French players, much to the disappointment of the local fans…

The game saw a lot of fire on the board, from the early stage of the game:

Black played 12…c5 and after 13.Bxc4! dxc4 14.d5! saw himself forced to sacrifice a piece with 14…Nxd5 15.0-0-0 Qa5. Although optically speaking he seemed to get some play, both of the players agreed it should not be enough. Bacrot summed it up very clearly ‘I played bad’. 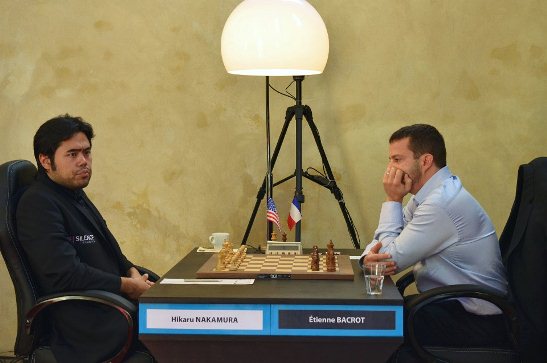 The Vice-World Champion quickly got an advantage in a rare line of the Queens Gambit. He managed to launch his isolated pawn forward to d5 to which Black was forced to play e6-e5.

Gelfand continued to play powerfully, getting from an advantage to a big advantage and increasing that to a winning position. It also cost him a lot of time on the clock; however, just before the time-control he missed the chance to wrap things up with:
39.Rxe5! Rxe5 40.Bf6 when Black has to give his first rook with 40..Rg5 41.Bxg5 hxg5 42.Qxg5 and now also the second rook has to be given in order to stop the d-pawn from promoting. (42…Be8 43.Qd5+!)

After that, Gelfand still held a commending advantage but Dominguez seemed to have got dry out of deep water, skillfully trying to set up a fortress… It would be outside the scope of this round-report to investigate this endgame deeply but we certainly recommend it to our readers.

In the end, Gelfand managed to break the defences of his opponent and gained the hard fought point after seven hours of play and almost 100 moves! 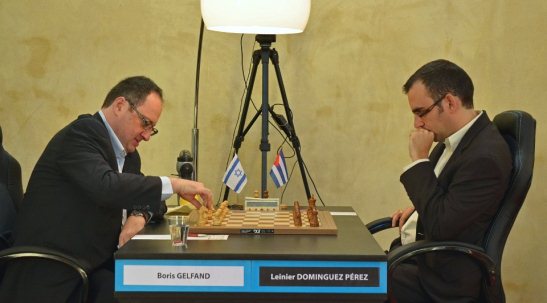 The most original story comes from the off-board area and requires some preliminary explanation. Chairs are personalized for each player, according to height and other physical parameters.

Each chair wears a label with the corresponding player’s name; after every round, the arbiters have to shuffle the chairs and not the label with their names, as in the vast majority of the tournaments!

In the beginning of the third round Grischuk showed himself unhappy with his personal president-like chair and changed it for a simple wooden one. When asked during the press conference why he decided to do so, Grischuk’s reply was very clear: “It is too comfortable, I would probably fall asleep!”

Indeed, he didn’t allow himself the luxury of relaxation and tortured Ponomariov for 86 moves, but could not break the defence of the former World Champion.

Grischuk was slightly better throughout the entire day. When Ponomariov placed his queen somewhat oddly on b5, Grischuk got some slight hopes but, as he later on said, ‘when he had to, Ponomariov defended well’.

Although Ponomariov had to be careful also throughout the remainder of the game, he kept defending well and eventually the players agreed a draw.