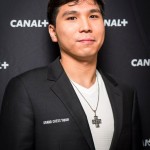 After three more days of rapid, Wesley So emerged as the sole leader of the tournament. He is now a full point ahead of the field, with Levon Aronian and Sergy Karjakin trailing him closely. Both So and Karjakin had an excellent showing today, scoring 2.5/3 points. The Russian grandmaster expressed that his rival is playing brilliant chess and might be unstoppable, but felt much more confident after his second win of the day. Levon Aronian came into the day tied with the leader but was not able to keep pace and only won one game. Hikaru Nakamura and Viswanathan Anand are trailing the leader by two points and are still a striking distance away. Tomorrow the winner of the rapid portion will be decided.

Round 4
The day started with a bloody round of four decisive games and just one draw. Two of the leaders, Wesley So and Levon Aronian kept pace with each other by defeating Vladimir Kramnik and Shakriyar Mamedyarov, respectively. The American won in a quiet manner, by locking his opponent’s knight out of the game and winning material. Mamedyarov played quite aggressively in the opening, launching an attack on the kingside, but Aronian was able to turn the tables and went for a king hunt himself. Viswanathan Anand, who was the other leader coming into the round, wasn’t able to break through Sergey Karjakin’s defense and had to settle for a draw. Alexander Grischuk won an attacking game against Maxime Vachier-Lagrave with a nice tactical shot. Hikaru Nakamura took any chance he could get against his Olympiad teammate Fabiano Caruana, who is seemingly poor form. His efforts eventually paid off when Caruana collapsed and blundered several times in the endgame.

Round 5
The quieter round allowed Welsey So to become a clear leader after defeating Alexander Grischuk. The Russian sacrificed a pawn in a dynamic position but overlooked a knight retreat which left So with decisive material advantage. Sergey Karjakin demonstrated why opposite color bishops are dangerous in the middlegame by launching a devastating attack against Shakriyar Mamedyarov’s king. Levon Aronian remained a point behind the leader with a solid draw against Valdimir Kramnik. Hikaru Nakamura and Viswanathan Anand tied with Karjakin for third place after drawing Maxime Vachier-Lagrave and Fabiano Caruana respectively.
Round 6
Sergey Karjakin kept climbing in the standings after unleashing a brilliant sacrifice and leaving Vladimir Kramnik’s king defenseless. The draws in the rest of the games allowed the Russian to tie for second place with only a point behind the leader. In the big match up of the round between Levon Aronian and Wesley So, the Armenian was not able to utilize his slight advantage and settled for the peaceful result. Viswanathan Anand and Maxime Vachier-Lagrave agreed to a draw when there were only kings left on the board. Hikaru Nakamura was once again the last man standing until Alexander Grischuk forced a draw with a perpetual check. The early piece exchanges in the battle between Shakriyar Mamedyarov and Fabiano Caruana lead to an uneventful game.