Winning his fifth game out of six played thus far, Srinath, winner of three Asian Junior titles, came close to attaining a Grandmaster norm following his win and a lone draw in the next two games should be enough to seal the GM norm.

Playing with white, it was hard work for Srinath in over four hours of struggle with Cruz. The game was dragged in to a same colour Bishops endgame wherein Srinath benefited through his passed pawns on different flanks. It was the longest lasting game of the day. 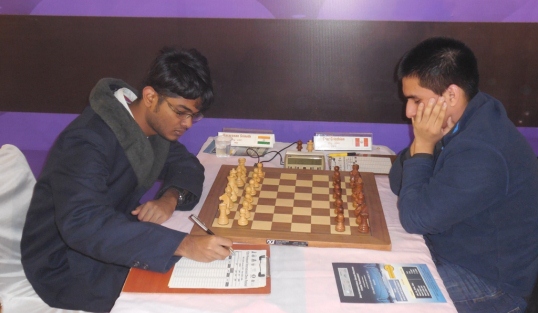 At the top of the tables, Mikhail Mozharov of Russia neutralised the initiative of Ukrainian Andrey Baryshpolets to draw with ease as black out of a King’s Indian defense game. The two overnight leaders were joined by Srinath and second seed Ivan Popov of Russia in lead on six points with three rounds still to come in the premier section of this 30 Lakh prize money chess festival.

The four leaders are followed by four aspirants on 5.5 points each. They are Grandmasters Sahaj Grover, Deepan Chakkravarthy and International Master S Nitin and Van Huy Nguyen of Vietnam.

It turned out to be an easy day for Grover against French Grandmaster Vladimir Lazarev who did not have a clue in the middle game arising out of a less-played Sicilian Taimanov as black. Grover launched the king side attack and had no troubles securing another fine victory in the tournament.

Deepan Chkkravarthy also scored a fluent victory at the expense of Vikramaditya Kamble. “I got a good opening and the pressure did the trick for me”, Chakkravarthy said in the post game chat.

Nitin also improved his maiden GM norm chances immensely by beating higher ranked Saptarshi Roy. “I really dont want to think about the norm and take it one game at a time”, said Nitin who had earlier beaten GM Alexander Evdokimov of Russia and Valeriy Neverov of Ukraine in the tournament.

Meanwhile as the ‘B’ group ended, Rakesh Gurung of Sikkim went home richer by Rupees 1.5 Lakh tallying nine points out of a possible ten. Delhi youngster Manan Rai made the organisers proud by winning the second prize of Rs. 1.2 Lakhs while Prasad Aurangabadkar of Maharashtra won the third prize. 484 participants took part in the ‘B’ group while the ‘C’ group that started on Tuesday has participation of 680 participants. 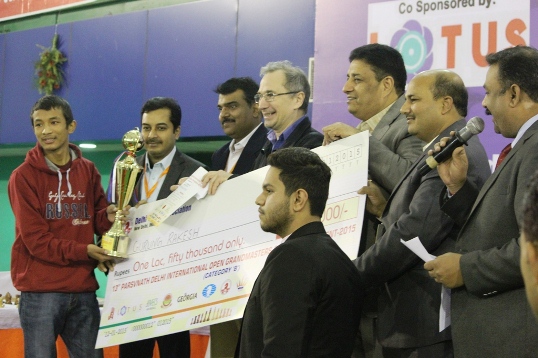