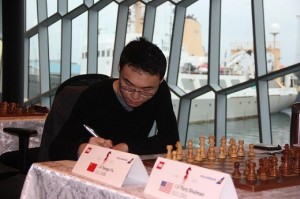 The fourth round is about to finish in the massive Reykjavik Open and there are three players that arrived with a perfect score and managed to keep it with a victory today.

Besides the quick and spectacular win that Maxime Vachier-Lagrave obtained early in the day, the Ukrainian GM Pavel Eljanov and the Chinese GM Yu Yangyi have managed to start with four straight victories.

Pavel Eljanov defeated GM Kveinys Aloyzas from Lithuania with the white pieces. The Ukrainian used his queenside play effectively and got a passed pawn on the a-file. When a queen trade was unavoidable, the Lithuanian resigned understanding that the rest was just a matter of technique.

Yu Yangyi’s victory was of a different nature. His rival, American GM Yuri Shulman, chose the French Opening and went for a very tactical line where he keeps his king in the center. The Chinese attacked his brave opponent from all flanks until the black position became way too vulnerable even for the talented Shulman. The game finished after 33 moves in a position where white is about to get a rook advantage.

GM Grzegorz Gajewski might be the fourth player to get a perfect score, given that he has a winning position against IM Andrew Muir.