The race for the US$13,000 top prize has intensified as a large chunk of the highest-rated seeds dropped out of the leaderboard, but it was a suspected cheating incident by one of the tournament’s lowest-rated players that stole the limelight in Wednesday night’s third round of the 19th Dubai Open Chess Tournament–Sheikh Rashid Bin Hamdan Al Maktoum Cup at the Dubai Chess and Culture Club.

Sixth-seed GM Eduardo Iturrizaga of Venezuela, eighth-seed GM Vidit Santosh Gujrathi of India, 12th-seed GM Sandro Mareco of Argentina and 18th-seed GM Mustafa Yilmaz of Turkey are the only players among the top 20 seeds with perfect slates after their super-grandmaster peers yielded to upset losses and draws. 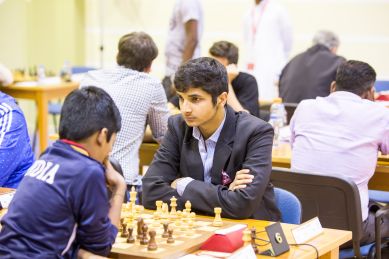 GM Alexander Areshchenko, the second-seed from Ukraine, and GM David Anton Guijarro from Spain, lead a big group of 2.5-pointers after they were held to draws by GM Sunilduth Lyna Narayanan of India and IM Alireza Firouzja of Iran in the top two board match-ups.

Adly is the only Arab player with a perfect score after his win over IM Karen Grigoryan of Turkmenistan, while his compatriot GM Bassem Amin dropped to 2.5 points following a draw with IM Johan Salomon of Norway.

The UAE’s number player, GM Salem AR Saleh, continued his march back to the top following an opening-round upset loss after beating FM Joydeep Dutta for his second win in a row. FM Saeed Ishaq, the reigning UAE champion from Dubai, stayed on track in his quest to secure a GM norm after settling for a draw with GM Nijat Abasov of Azerbaijan.
Salem Ahmed Salem, on the other hand, pulled off one of the big wins for the UAE contingent after beating IM Irina Berezina of Australia. 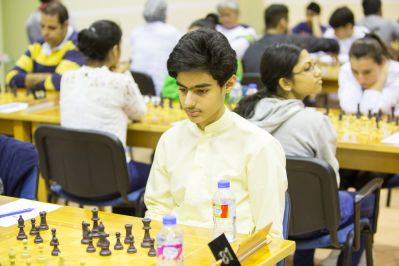 However, the explosive board battles were overshadowed by an apparent cheating attempt involving a 21-year-old player from India. Jeel Shah, who has a standard FIDE rating of 1764 and seeded 192nd out of 213 players in the tournament, caught the arbiters’ attention because of suspicious behaviour during his game against 14-year-old Dushyant Sharma of India.
After closely monitoring his actions, International Arbiter (IA) Mahdi Abdul Rahim, the tournament’s chief arbiter, summoned Shah to the arbiter’s office for an inspection, where he was found to be hiding a mobile phone under the sleeves of his shirt. Shah refused to comply with the arbiters’ request to turn the phone on to check if it was being used to run a chess program, prompting tournament officials to expel the Indian player from the tournament.
As per Fide rules, mobile phones and other electronic devices are not allowed in the playing hall of a tournament.