The tie-breaks of the FIDE Women’s World Chess Championship Semifinals were played in SCC Galactica (Sochi, Krasnaya Polyana) on March 31.

In their first 25-minute game Cramling and Pogonina continued the theoretical discussion in the Queen’s Gambit started in the first classical game. The Swedish player was first to deviate and got a slightly better game. Later, however, Cramling hesitated and gave Pogonina time to rearrange pieces. Realizing that she is losing the initiative, Cramling forced a draw by move repetition. 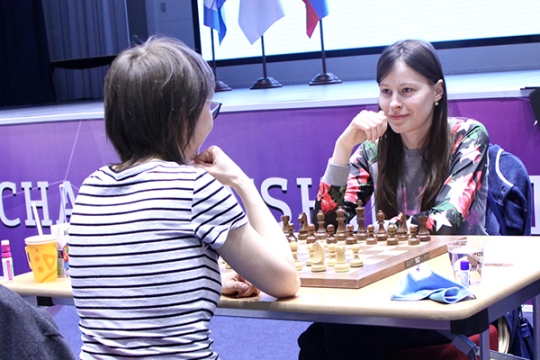 In the second rapid game the players once again repeated their classical match opening – the Paulsen variation of the Sicilian defense. Pogonina placed her pieces of ideal squares and took complete control in the center. Around the 40th move she started a direct attack on the black king and could win by force, but missed the winning continuation.

The game extended considerably, and only on the 116th move Natalia broke the resistance of her tenacious opponent. The Russian won 1.5-0.5 on tie-break and advanced to the final match.

Harika Dronavalli and Mariya Muzychuk exchanged blows in rapid games, both winning with Black pieces. The first game saw wild complications. Harika, playing White, sacrificed a rook and created a strong attack, but in the time trouble did not find the winning maneuver. Mariya found the defense, parried all White’s threats and kept the decisive material advantage.

The return game was very stressful and erratic. First Black made a mistake and lost a pawn, then White returned the favor, allowing her opponent to create dangerous counterplay. The Indian developed powerful piece activity and tied the score in a sharp game. 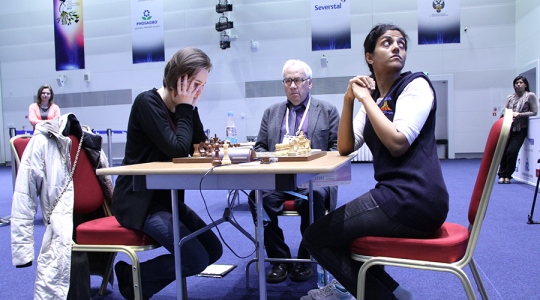 The first 10-minute game was probably a key to the match. Dronavalli outplayed her opponent and transposed to a queen ending with two extra pawns, which was completely winning for White. However, her timing of the queen exchange was extremely unfortunate, as the resulting pawn ending turned out to be drawn. This lucky draw clearly inspired Muzychuk.

The Ukrainian handled the next game with great confidence and won convincingly, securing her seat in the final.

April 1 is a rest day. The final match between Natalia Pogonina (Russia) and Mariya Muzychuk (Ukraine) begins on April 2 at 3 pm Moscow time. The Russian has White in the first game.

The final match consists of four games with 90 minutes per 40 moves and 30 minutes for the rest of the game plus 30 bonus seconds added after each move. If the match is tied 2-2, it will be continued on tie-break.