After the rest day the event was resumed with the round 4 games.

Viktor Bologan provided us with a valuable endgame lesson in his clash with Ivan Cheparinov.

The game was actually very interesting throughout. Cheparinov started with the Gruenfeld Indian defence and Bologan replied with the popular 3.f3. This line is definitely deeply analysed in Moldovan chess circles as GM Dmitry Svetushkin has just published a book “The Ultimate Anti-Grünfeld – A Sämisch Repertoire”.

Bologan sacrificed a piece to bring the rooks to the 7th rank, but it was not obvious how could he achieve advantage. Cheparinov helped by hastily giving the extra piece for the advanced pawn.

The resulting rook endgame clearly favored white but it was not easy to convert 3 vs 2 P into a full point. Bologan had patience and skill to execute a maneuver similar to the theoretical Grigoriev’s combined method to finally win the game. 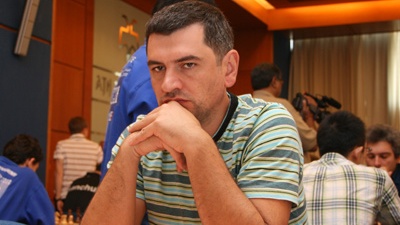 Pavel Eljanov defeated Ernesto Inarkiev from the black side of Caro-Kann. The position was roughly equal until white over-pressed for which he was duly punished.

Viktor Laznicka experimented too much with his Queen’s Gambit Accepted. One queen’s move too many and Alexander Onischuk seized a strong initiative. The American quickly wrapped up the game.