A press-conference dedicated to cooperation of the Sistema Charity Fund and the Non-profit Partnership Chess in Schools aimed at introducing chess into the Russian school curriculum and increasing the role of chess in general education took place at the Women’s World Chess Championship press center on March 17.

It was attended by the FIDE President Kirsan Ilyumzhinov, legendary former World Champion Nona Gaprindashvili, the President of the Sistema Charity Fund Tatiana Gvilava, and the Chairman of the Non-profit organization Women in Business Galina Roketskaya.

The Chess at schools project in Russia was initiated by the FIDE President Kirsan Ilyumzhinov and approved by the Russian President Vladimir Putin. It includes developing school textbooks and teachers’ manuals as well as organizing scholastic chess tournaments. Apart from that, cooperation with the Russian Ministry of Education and other relevant institutions in necessary for introducing chess into the curriculum. 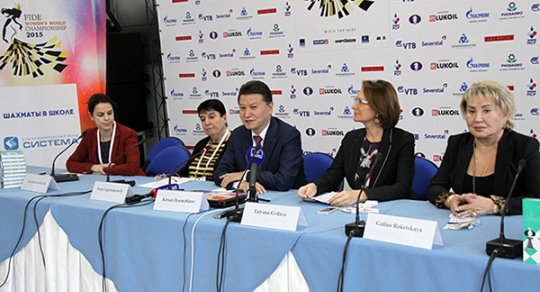 Kirsan Ilyumzhinov: “First of all, please let me once again congratulate you with the start of the Women’s World Championship in beautiful Sochi, which becomes sports and intellectual center on the world map. Last year the world’s strongest chess player Magnus Carlsen defended his title in Sochi, and within three weeks we will find out the next Women’s World Champion.

One of the main projects of FIDE is Chess in Schools. Who can assist us better than women, who takes care of children, of new generations? A few years ago we set a goal of growing the number of people playing chess to one billion. Why? As you can see, the world is troubled by conflicts, wars, financial and political crises. These crises appear because there is a shortage of thinking men, not because of a shortage of oil, gold, or money. And the first rule of every chess player is “think first, then make your move”. It should be the same for politicians as well.

A year ago we met with Tatiana Alexandrovna and Galina Andreevna and decided to join our efforts. We have the same goal of growing a smart and culturally educated generation of our children.”

Tatiana Gvilava: “The Sistema Charity Fund, for which I work as a president, belongs to the corporation AFK Sistema. The chief shareholder of the AFK Sistema is Vladimir Petrovich Yevtushenkov, and he happily accepted Kirsan Nikolayevich’s offer to cooperate in introducing chess at schools. The AFK Sistema has a large project Lift to the Future, which focuses on talented youth. Sistema is a hi-tech corporation with many thinking people working for it, and it decided to join the efforts with FIDE’s Chess in Schools project in order to develop the new generation and help it to become smarter, more talented, more perspicacious.”

Kirsan Ilyumzhinov: “We have many years of fruitful cooperation. In 1998 the AFK Sistema helped the Russian government and the Kalmyk leadership to build the world’s first chess city – City Chess – and carry out the 33rd Chess Olympiad.”

Galina Roketskaya: “What links our organization with chess? Well, business is much like chess. You win if you build your strategy correctly, otherwise you lose. We will try to help Kirsan Nikolayevich with his goal of a billion chess players, for our organization has branches in 43 Russian regions. Our members are thinking women, and we will do everything we can to achieve this goal.”

Nona Gaprindashvili: “I can only salute to such initiatives. FIDE continues its efforts of chess promotion. It organizes many chess competitions that never existed when I actively played chess. And I am happy to see women joining the project of developing chess. I wish you all success in our mutual cause. I would like to say a few words about wonderful conditions created in Sochi for the players. A wonderful playing hall, an excellent hotel – there is everything needed for great chess!”

Kirsan Ilyumzhinov: “The agreement signed between the Chess at Schools organization and the Sistema Charity Fund secures a long-term effort. We’ll work together for decades! Publishing books for school children, carrying out seminars not only in Moscow and St. Petersburg, but nationwide. Another goal of this agreement is supporting talented children. We are planning to invite famous trainers to work with children in many Russian regions. We will create grants not only for children, but also for journalists, trainers, and chess teachers at schools.”