KARLOVICH: Dear ladies and gentlemen, let me welcome our new guests: the representatives of the National team of Greece: GM Stelios Halkias and GM Ioanis Papaioannou. The match Greece-Russia is still under way but Ioannis Papaioannou has already made a draw against GM Vladimir Kramnik, Please share your impression on the match with me, Goran Urosevic and our journalists.

PAPAIOANNOU: Well, it was of course an interesting game. Some time ago I prepared a novelty. I was keeping it to try against some big fish so I had Kramnik today to use it. To say the truth I did not care a lot if I win or lose for he is very strong to play against.

And I was lucky today. After I played this line, suddenly he started thinking. To my mind he was not well prepared for this novelty. As a result I had a good position after the opening. Later on he showed a tremendous class, he sacrificed his queen and the position became completely unclear.

I thought that in this technical position he will somehow find a way to beat me. But on my opinion in the end he made one inaccurate move and maybe I had a slighly better position. Few moves before the end of the game I played Bc5 and he took on c5. I think he should have better played on d5 and this could have led to an unclear position. My queen on a5 is misplaced but when he took on c5 my queen was in better position and I became slightly better. Plus Vladimir was in a severe time trouble.

But I did not want to take any risk so I prefered to repeat the moves. After the game Alexey Shirov and some other players came up to me and asked why I did not continue playing for according to their opinions my position was obviously better. But I was not that sure and as I said I preferred not to take any risk. For some strange reason we have very good result in the matches against Russia.

UROSEVIC: My question to both players, how did your national team prepare to the Olympiad, what chances do you have to your mind?

PAPAIOANNOU: Actually this time we did not have any coach because of the financial crisis that hit Greece big time. Everyone on this planet knows about it. So, we were preparing alone. So, we came here to do our best. When a person has some problems he starts to be more stubborn maybe this will help us this time.

KARLOVICH: Stelios, how did you prepare for the Olympiad and what do you think about today’s match?

HALKIAS: As Ioannis said we don’t work now together and we don’t have special trainings for there are no means for that. We are stubborn to work by ourselves. We also realize that it is hard to achieve something alone, but we came here to prove something, we are not completely dead and we will try to do something. We are not that ambitious, we just want to show that we do have some talent and we are trying to show it now. 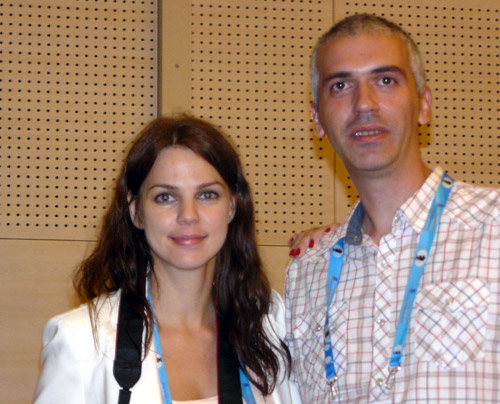 UROSEVIC: My question is to Ioannis. I saw you recently in the tournament and I was amazed that you remember all the games that were played there. Is it a special approach to a game? If you decide one day to write a book, what will be the title of it?

PAPAIOANNOU: Well, those who know me are aware that I enjoy every single game in any tournament. If there are 65 games, I will look all of them. And I try to remember the important games. I can replay them of course. I am very much lucky to remember them though I have never been a professional chess player. As for the book, well, if I decide to write one, I will name it “How not to play chess” or “How to observe chess being a Grandmaster”

KARLOVICH: My question is to Stelios. How do you prepare for your games? Do you spend a lot of time or maybe you use a Greek way: you have frappe, you relax and you just go. Or maybe you have some special preparations?

HALKIAS: I must say that we are very serious as far as preparations are concerned. People know that we, Greeks, make a lot of jokes, Of course this is a part of the program: jokes, fun and coffee, but still we do some work anyway. And making jokes take the stress away so this is a part of a strategy.

But seriously, we start our preparations when we know the opponent after the pairings. Yesterday for instance when we got to know that we play against Russia we spent 45 minutes laughing. We were joking and trying to make many scenarios what we could try to do against Russia. Nothing bad of course, just funny jokes, entertaining ourselves.

PAPAIOANNOU: We were trying to prepare at least 30 first moves which would not allow Russians to win us before these moves. This was our rule.

HALKIAS: Another possible scenario could be that Ioannis would end up in a technical position in his game against Kramnik who as all know is very strong in them. So, Ioannis had an idea that if this happens, he would ask Kramnik to play for both of them. As for the reality, I saw the positions in the remaining pairs, our guys are slightly worse, but we hope that with a little luck we would manage to make a draw.

KARLOVICH: I wish you good luck!